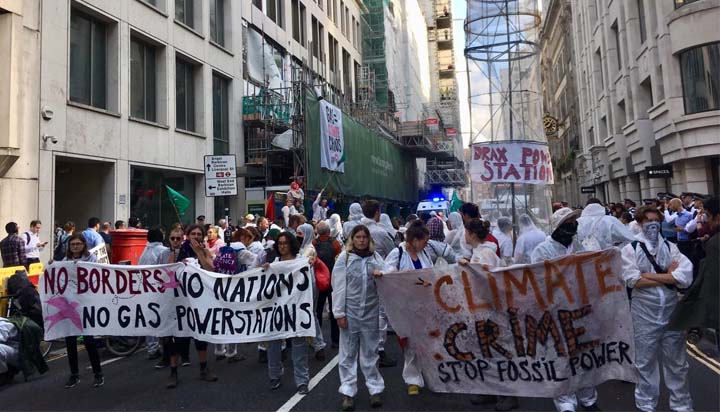 Protesters outside the Drax HQ in London. Image: Reclaim the Power

Climate change activists have targeted the sites of Big Six energy company SSE and Drax to protest against their plans to build new gas power stations.

Members of the Reclaim the Power group, dressed in white boiler suits and with a four-metre high model gas tower, gathered outside the London offices of Drax, which has proposed to build a new gas plant in Yorkshire.

The group believes the UK “cannot afford to build any additional fossil fuel infrastructure” to stay within its national legally binding climate targets and meet its 2050 net zero goals.

Speaking from the protest in London, Milo Phillips said: “The government’s promises to act on climate change are meaningless while dirty gas power stations are still being built. Drax’s gas plant in North Yorkshire would be the largest gas power station ever built in the UK.”

A Drax spokesperson said: “Climate change is the biggest challenge the world faces and natural gas is playing an important role, supporting renewables like wind and solar, helping the electricity system decarbonise. When the wind doesn’t blow and the sun doesn’t shine, we need something else to provide cost-effective electricity to power our homes and businesses.”

The £350 million power station is being constructed alongside an existing facility near Scunthorpe.

Ellie Groves, an activist part of Reclaim the Power added: “New gas spells climate disaster, that’s why we’re here today at Keadby. Temperature hit 38 degrees in the UK last week and extreme weather is already devastating many parts of the world. We’re standing with the people most impacted by the climate crisis.

A spokesperson from SSE said: “A group of protesters gained access to the construction site of Keadby 2 Power Station earlier today, the majority of which have now left the area. Our priority has been to ensure the safety of all those on the site and we are continuing to work with the police and relevant authorities until the situation has been fully resolved.

“SSE’s business strategy addresses the challenge of climate change at its core, as the leading developer, owner and operator of renewable energy across the UK. However, we understand that flexible thermal generation will play a critical role in the transition to net zero emissions, particularly with the emerging potential for carbon capture and storage technologies.

“When completed, we expect Keadby 2 to be the cleanest and most-efficient gas-fired power station in Europe, displacing less efficient plant from the system, complementing our renewable assets and safeguarding customers’ power supplies.”