World’s longest turbine blade arrives for testing in the UK 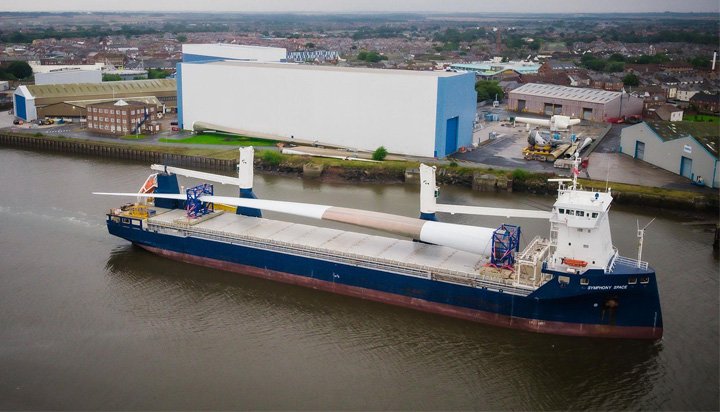 An offshore wind turbine blade claimed to be the longest in the world has arrived in the UK for testing.

The Haliade-X 12MW offshore turbine blade is bigger than nine London buses or the pitch at Wembley Stadium or the Statue of Liberty.

It will undergo a full range of advanced testing procedures, demonstrating its ability to withstand peak wind conditions and simulating its readiness for years of operation at sea.

One Haliade-X 12MW turbine is capable of generating up to 67GWh of electricity a year, enough to power around 16,000 households in Europe while saving up to 42 million metric tons of carbon emissions.

That’s equivalent to the emissions generated by around 9,000 vehicles annually.

Three other blades will be shipped to a prototype site in Rotterdam, Netherlands, with the shipping and testing of the first components keeping GE Renewable Energy on track to commercialise the technology in 2021.

ORE Catapult Chief Executive Andrew Jamieson said: “We’re delighted to have taken delivery of the world’s longest blade at our Blyth test facility, where we’ll put it through an extremely rigorous testing programme designed to make sure it can withstand years of operation at sea. This 107-metre blade, which is larger than the total wingspan of an A380 aircraft, represents a huge milestone for our industry and will be part of the innovative Haliade-X 12 MW next-generation offshore wind turbine.

“Testing these world-leading technologies here in the UK cements our position as a global leader in offshore wind and presents unparalleled opportunities for the UK supply chain to develop new products and services, creating jobs and generating economic benefit.”

GE Renewable Energy is investing nearly £15 million in testing and research and development activities for the Haliade-X, primarily in the UK.

The company, along with ORE Catapult, are also developing a programme, which aims to reduce the time people spend at sea, increasing safety and helping to reduce the cost of energy by focusing on developing technology in robotics, digital and remote operations.