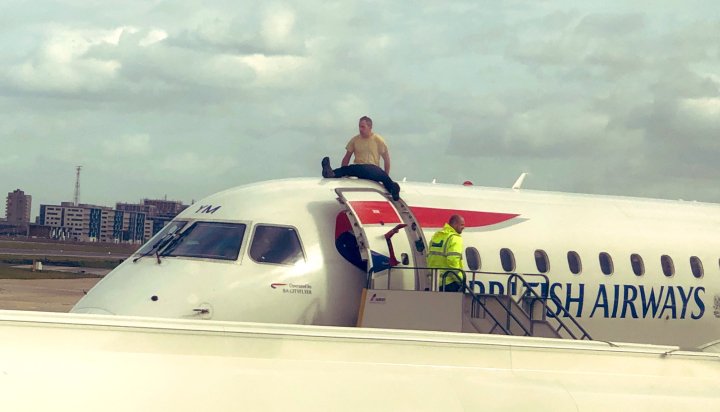 An Extinction Rebellion protestor has climbed onto a plane at London City Airport to raise attention to the damage inflicted on the environment by the aviation industry.

James Brown, a blind Paralympian cyclist, managed to get onto the roof of a British Airways plane before recording a message on his phone, which he then broadcast live on the internet.

He was not the only activist causing disruption at the airport today – police arrested several people climbing on the terminal building and blocking the airport entrance, some of which had glued themselves to surfaces.

An additional activist had to be escorted off a plane.

Extinction Rebellion tweeted: “Utterly selfless and incredibly brave. Well done James, we are all with you. #EverybodyNow #NowIsTheTime #ExtinctionRebellion #RebelForLife”

London City Airport said: “A number of protesters remain outside the front of the airport terminal and we are working hard with the Metropolitan Police to minimise disruption to passengers. The airport remains fully operational.”

Today marks the fourth day of the international protests, which are due to continue through next week.