Fly away! Electric air taxi to carry passengers from Brighton to London in 30 minutes

The flying taxi, which could carry five passengers, is said to be on course to start commercial flights in 2024 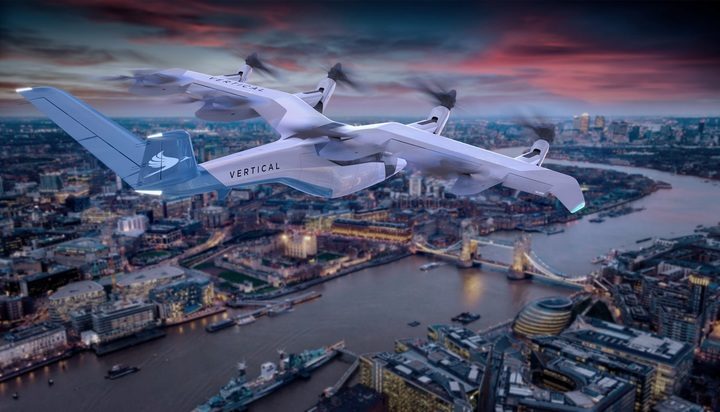 An all-electric jet taxi will soon be able to make quick and sustainable connections between UK cities, including a 30 minute-journey from Brighton to London.

That’s the claim from Bristol-based company Vertical Aerospace, which has unveiled a fixed-wing aircraft it says could travel with zero emissions from Canary Wharf to Heathrow Airport in under 20 minutes.

Capable of carrying up to five people, a pilot and four passengers, the VA-1X is set to be the ‘world’s first’ certified winged all-electric Vertical Take-Off and Landing (eVTOL) aircraft and is on course to start commercial flights in 2024.

The firm says the new jet will offer emission-free flights with no fumes or contaminants from combustion products and it will also be powered by renewable energy where possible.

The jet, which will be certified with the European Union Aviation Safety Agency in Europe, features charging points to allow passengers to work whilst travelling and information screens to keep them up to date on their journey’s progress.

The engineers of the new air taxi also note the VA-1X will be aerodynamically efficient, able to fly at speeds of up to 150mph and a range of up to 100 miles with far less energy and power than a helicopter would need.

It is also designed to reduce noise as it uses a distributed propulsion system and large open rotors which allow the jet to be 30 times quieter than an equivalent size helicopter.

Michael Cervenka, CEO at Vertical Aerospace, said: “With the launch of the VA-1X, we’re proud to be taking eVTOL one step closer to mass-market adoption and supporting the next era of aviation.”