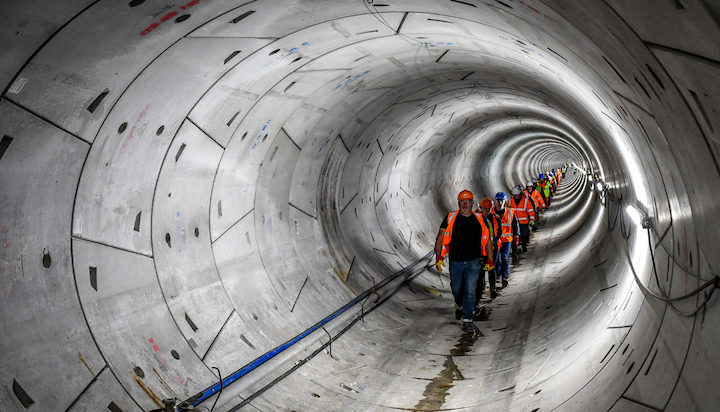 A new gas pipeline built 30 metres under the surface of the River Humber, a world record-breaking engineering project, has been completed.

The £150 million ‘Humber Tunnel’ pipeline, which is part of the national transmission system and connects the import terminal at Easington, on the east coast, to the wider gas network, is now delivering gas to National Grid.

It can transport between 70 million to 100 million cubic metres – or around a quarter – of Britain’s gas.

The feat of engineering involved an 18-month journey drilling a 3.65-metre diameter tunnel beneath the estuary to enable the new pipeline to be installed, with hydraulic thrust machines pushing sections of pipe on rollers into the new runnel and the pipes methodically pushed into the tunnel which had been flooded with treated water to aid installation.

The push continued until all 4.69 kilometres of pipeline were fully installed in July 2020, securing a place in the Guinness World Records, by becoming the world’s longest hydraulically inserted pipe.

Our world record-breaking #HumberTunnel has started delivering gas. At 30m below the surface of the #RiverHumber, the pipe can now transport between 70 to 100 million cubic metres – around a quarter of Britain's gas. pic.twitter.com/rel3eWZ2bA

The tunnel boring machine ‘Mary’ was equivalent in length to 11 double decker buses and weighed 220 tonnes.

Emma Ford, Head of Gas Construction for National Grid said: “Complex engineering projects such as these require a huge amount of skill and dedication from all those involved. To have delivered this ahead of the cold winter months despite COVID-19 restrictions is a fantastic achievement.”

The grid operator adds the pipeline has the potential to play a “big role in the future” as National Grid explores how cleaner alternatives of hydrogen and biogas can be used on the gas network, helping the UK hit its 2050 net zero carbon target.