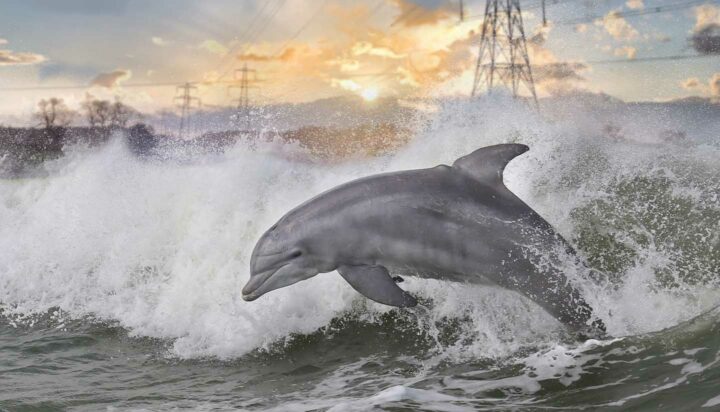 Rescued theme park dolphins are being trained to generate tides for energy production.

A trial experiment near Sendero El Jagre, Tenerife, is using dolphins who worked at  theme parks to generate waves with their tail fins, these are then being captured using a tidal capacitor system to generate power.

The four bottlenose dolphins were previously from nearby themeparks and so now face a retirement where they can help in renewable energy science, rather than entertain crowds.

Dr Pepelo Bugia from the University of Lecce, Italy is the chief scientist conducting the trial, he explained the idea behind it.

“We all know that themeparks with orcas and dolphins are starting to close down because of public opposition. But the trained dolphins cannot be released into the open sea as they cannot survive in the wild.

“We have used their training to perform tricks for treats to offer them a new career if you like. They are trained to perform their tail fin dances where they often stand up for short bursts of time so we can capture the wave energy they generate.

“The animals are also very happy to line up and splash their fins in a vortex, a circle which also offers more powerful waves. We just get them to do this in a pen with a capacitor barrage which captures that potential energy.”

Dr Bugia denied it was exploitation of animals who had already been in captivity.

“No, no. We want to show that these animals who are highly intelligent, need to have stimulation once they are retired from the theme parks. They are having fun and keeping the human interaction they have got used to.”

So far the experiments have generated surprisingly large bursts of energy for short periods. The idea is to see if such barrages could be made in areas where there’s large migrations of cetaceans on a regular basis and could provide an alternative income for fishing communities who often catch the mammals.