The New Weather Institute says SUV advertising should be banned, in much the same way tobacco advertising has been outlawed in the interest of public health 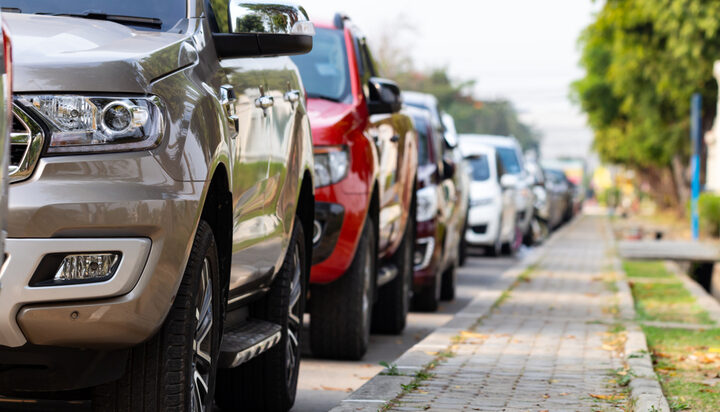 The stereotype of the ‘Chelsea tractor’ is true – and these vehicles are a primary contributor to urban air pollution, traffic deaths and climate change.

That’s the conclusion reached in a new report from the New Weather Institute, which has investigated the increase in SUVs on the UK’s roads, as well as the marketing campaigns that it argues have led to their prolific use in unsuitable city environments.

It highlights a “dramatic rise” in the proportion of SUVs being sold – whereas they made up around a tenth of total car sales only a decade ago, they now corner more than 40% of the market.

Aside from the environmental damage they create, the report also highlights SUVs add to congestion, take up more room on public roads and are more deadly in road accidents.

It found despite being originally designed for ‘off-road’ country use, the London Borough of Kensington and Chelsea tops the national rankings for SUV purchases, with more than a third of new private car sales in these areas being large SUVs.

Hammersmith and Fulham, Westminster and Richmond upon Thames take the next three highest spots on the list – supporting these findings, the research shows that three-quarters of all SUVs sold to the UK public in 2019-2020 were registered to addresses in urban areas.

The organisation calls to ban SUV advertising, in much the same way tobacco advertising has been outlawed in the interest of public health, noting that advertisers use misleading marketing campaigns grounded in the idea of enjoying nature and exploration, while simultaneously driving the destruction of the natural environment.

It states: “In fact, rather than being an invitation ‘to’ nature, the SUV closer resembles a war ‘on’ nature.”

The report adds: “What strings have advertised pulled in people to bring about such a perverse shift in the face of the double air pollution and climate crises? Decades of work and countless billions – an estimated $9 billion (£6.6bn) alone between 1990 – 2001 before the market took off – have gone into carefully and deliberately cultivating consumer demand for vehicles that are bigger and more powerful than their typical buyers could ever need in practice. Consumers’ susceptibility to four key messages and associations, repeated, mantra-like by advertisers, have been exploited. Variously they manipulate and co-opt our fears, instincts and even better natures. These are: i. get back to nature, ii. dominate the road, iii. help the environment and, iv. protect your family.

“Although effective, with one exception, they’re highly misleading. Evidence suggests that SUV occupants are no safer, SUVs are much worse for the environment than smaller vehicles, and that the SUV marketers’ promise of escape to the wilderness tends to remain stuck in congested town and city traffic or in an urban parking space. The exception, though, of ‘dominating the road’, is a problem for everyone not riding around in an oversized SUV. Their rise has made other road users less safe.”