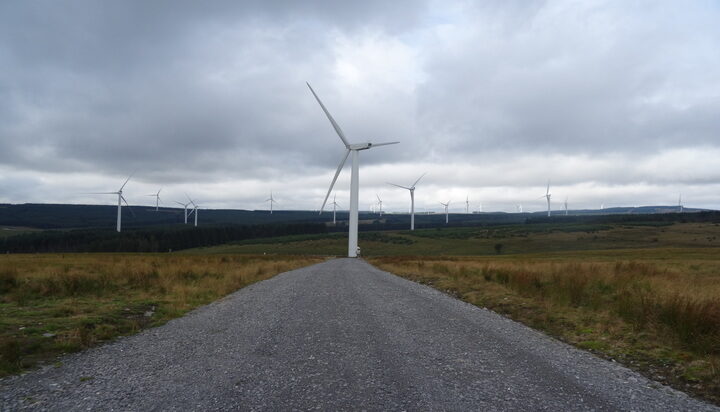 A 300-feet £20 million wind turbine has been snapped off by gusts near Bridgend in South Wales.

The collapse happened after strong winds overnight on Monday.

The fallen wind turbine, manufactured by German firm Nordex, is part of the 25MW Pant-y-Wal wind farm which is located four kilometres to the north of the village Glynogwr in Bridgend County Borough.

The reason for the collapse of the wind turbine is still unknown and an investigation is underway.

A Bridgend County Borough Council spokesman told ELN: “Work is currently being carried out to establish which side of the border the collapse has occurred upon, and site owner Pennant Walters has been contacted for further clarification.

“Planning consent for this scheme was approved in 2009 after the site, which is not near any populated areas, was identified as being suitable for large-scale wind power by Welsh Government.”

“The Council is keen to ascertain what may have caused this failure and is seeking assurance, that all reasonable steps have been taken by the land owner, to secure access to this remote location, to reduce any potential risks to the public, utilising footpaths upon this remote hill-top location.”

A Nordex spokesperson told ELN: “Unfortunately an incident occurred at the Pant-y-Wal wind farm in Wales. On Monday 14th February 2022, a N90/2500 turbine collapsed. No persons were injured.

“The only material damage that has occurred as a result of the incident is to the turbine itself. All necessary safety measures have been implemented immediately after the incident.

“A team of local Nordex specialists with experts from Nordex main office are currently investigating the root cause of the incident together with the wind farm owner. As yet, no reliable statement can be made as to the underlying cause of the collapse.

ELN has approached Pennant Walters for a response.