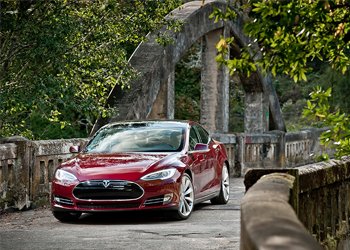 The Model S (pictured) being sold at the store has a £49,000 price tag, once a £5,000 government grant is taken into account. For the moment they will all be left hand drive, as the right hand version doesn’t launch until March 2014.

Tesla confirmed plans to install a network of free ‘Tesla Superchargers’ in the UK, Motortrader.com reported. It claimed the chargers can fill the cars to half charge in 20 minutes. At the moment there are 32 of the charging stations in place in the US and six in Europe.

Elon Musk, Tesla co-founder and CEO is quoted as saying: “Tesla is taking the UK market very seriously, and there are more stores and service centres to come.”

The billionaire businessman – who also founded Paypal and Space X – added: “We’re also going to establish a Supercharger network so Model S customers will be able to drive long distances anywhere in the UK using our network for free, forever.

“The first Supercharger will be energised next quarter and we’ll aspire to have the entire country covered by end of next year.”