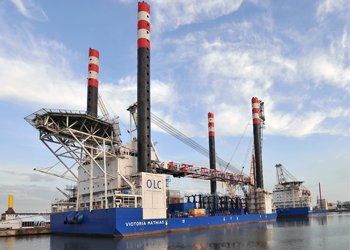 German company RWE has built a specialist ship for the construction of offshore wind farms across Europe.

The company’s renewable arm, RWE Innogy, says the €100 million (£80 million) Victoria Mathias ship will be able to transport up to four offshore wind turbines at the same time, a first of its kind.

The ship will eventually be used to transport 48 wind turbines to the North Sea to build a wind farm, which the firm says could power around 295,000 homes in Germany when operating.

The ship is built with a satellite-controlled navigation system which RWE claims can position the vessel within centimetres for construction work at sea. It also has a crane with 1000 tons of lifting capacity on board.

Following the Fukushima disaster last year in Japan, Germany turned its energy policy away from nuclear power and is aiming to get 35% of its power from renewable energy by 2020. Peter Teruim, deputy CEO of RWE AG said: “We need offshore wind farms in order to initiate a turnaround in energy generation in Germany and Europe.”

Another model of the ship will be used to build a wind farm off the coast of Wales later this year.