The UK’s first business park with ‘zero-energy’ costs has officially opened on an old Britvic site near Wigan (pictured). The first tenants have already moved into Armstrong Point, which has […] 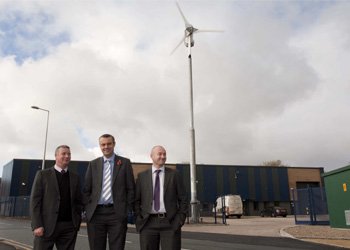 The UK’s first business park with ‘zero-energy’ costs has officially opened on an old Britvic site near Wigan (pictured).

The first tenants have already moved into Armstrong Point, which has nine business units where the tenants won’t have to pay any energy costs.

Armstrong Point estimates its tenants will save an average of £2 per sq ft on their rent because they will have zero energy costs.

All of the business units will have an Energy Performance Certificate rating of A+ as well as being only one of a handful of developments in the world to boast a BREEAM (BRE Environmental Assessment Method) Outstanding rating.

David Hunt, a director of the renewable energy firm Eco Environments which worked on the site with the developer Armstrong Properties, said: “We are confident that this will be the first of many similar projects like this across the UK as organisations increasingly put renewable energy and energy efficiency initiatives at the centre of their business strategy.”