Europe’s biggest carmaker officially opened the solar park (pictured) – claimed to be its largest facility in the world – which will provide power to its US factory. Built on […] 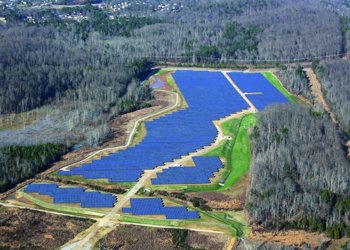 Europe’s biggest carmaker officially opened the solar park (pictured) – claimed to be its largest facility in the world – which will provide power to its US factory.

Built on Volkswagen’s (VW) compound in Chattanooga, Tennessee, the 9.5MW solar park includes 33,600 solar panels and occupies 13 hectares of land. It is believed to have the capacity of producing more than 13GWh of electricity per year, equivalent to the amount of energy used by 1,200 households. The park is also expected to meet around 12.5% of the plant’s electricity needs during full production.

Silicon Ranch Corporation will own the solar park and sell the electricity to Volkswagen under a 20-year supply contract.

Matthew Kisber, Silicon Ranch President and CEO said: “Today’s ‘Power Up’ launch not only greatly enhances the energy efficiency of VW’s Chattanooga plant and reaffirms its place as a true global environmental leader but it also symbolises the beginning of a new era in manufacturing operations throughout the region and worldwide. The scope of this solar park and the breadth of how much of the sun’s energy will be harnessed here will most certainly have a powerful and lasting positive impact on both our environment and our economy.”

The project is part of the carmaker’s ‘Think Blue. Factory’ initiative, which aims to make more efficient use of energy, materials and water as well as reduce waste and emissions. The company has set a target of cutting environmental impacts at every plant by 25% by 2018.

Volkswagen claims it has invested around $1 billion (£632m) in the Chattanooga facility and created more than 5,000 jobs in the region to date.