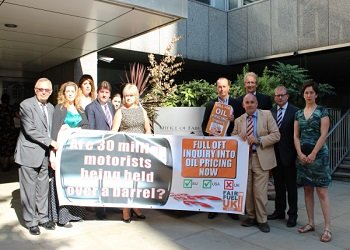 A national campaign group in support of keeping petrol prices down called on the Office of Fair Trading (OFT) to launch another inquiry into the scandalous oil price fixing allegations that came to light earlier this year.

FairFuelUK along with MPs handed in a 32,000-name petition to the OFT yesterday calling for a full and transparent inquiry into the Oil Pricing process.

The call comes following speculation the market has been fixed and follows the European Commission raiding the offices of oil giants BP and Shell in May this year over price fixing allegations in the last 10 years.

Quentin Willson, FairFuelUK spokesperson said: “Regulators in Europe and America are now actively investigating oil price manipulation, yet the relevant UK bodies it seems, do nothing… EU and US regulators have acted swiftly yet our regulators say everything in the world of oil prices is fine. There’s too much disquiet and whistle-blower testimony to leave the subject of oil price manipulation alone. Something needs to be done now.”

The OFT said it has spent five months undertaking a “comprehensive study” of the fuel market and “did not receive credible evidence” that it could pursue.

The watchdog added: “The OFT has been liaising closely with the European Commission but cannot take civil enforcement action in relation to the same matters as the Commission. We have also been liaising closely with other UK agencies, including the SFO and FCA, to establish whether there is sufficient available evidence to warrant a criminal investigation in the UK and if so who is best placed to take action.

“We continue to welcome any new information about this market. Where we receive credible evidence of potentially anti-competitive behaviour, we will look to take action, as we have done in other markets.”

Mr Willson added: “I can’t understand why a UK regulator can’t take information and evidence from US Senate and European Commission investigations and conduct their own. If the OFT processes are getting in the way of a full oil price market investigation in this country, then maybe its time to change the processes. Its time for a Parliamentary inquiry into the damage oil price speculation does to the UK economy.”