Plans for a new “graceful” style of pylon in Britain are marching on says the National Grid after two prototypes of the T-pylon have been built in Denmark. The T-pylon […] 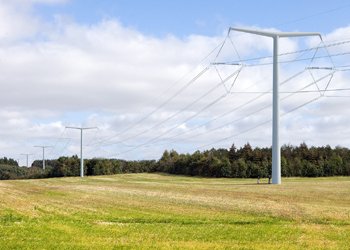 Plans for a new “graceful” style of pylon in Britain are marching on says the National Grid after two prototypes of the T-pylon have been built in Denmark.

The T-pylon (artist’s impression, pictured) was picked out of 250 designs in a competition run by the Department of Energy and Climate Change, Royal Institute of British Architects and National Grid last year.

It is now being offered for use in Somerset to transport electricity from the new nuclear reactor due at Hinkley Point and is likely to be built there in 2018.

Before this the National Grid will build a “test line” of T-pylons at its training centre in Eakring although a spokesperson couldn’t confirm when this would happen.

Mr Davey said: “To see T-pylon becoming a reality just 20 months after winning the competition, is a fantastic achievement for National Grid and the Danish architects, Bystrup and I’d like to congratulate them on their progress.”

He added: “Now communities can be offered a new choice and a radical departure from the traditional lattice. A smaller pylon, one third shorter than its predecessor, with different finishes allowing it to blend into the landscape”.

Designed by Danish architects and engineers Bystrup, it won because the “radical arrangement” of the electrical components meant it could be lower than the equivalent steel lattice pylon, says National Grid.

It will be the first new design of pylon since the Eiffel Tower-style cable carriers were brought in nearly a century ago.