Swedish furniture retailer IKEA’s stores in Dublin and Belfast (pictured) will soon be powered by renewable energy following its plans to buy a new wind farm. It is already being […] 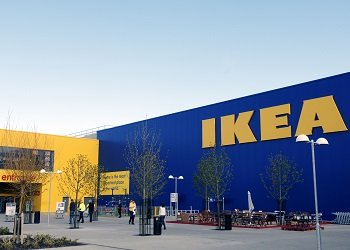 Swedish furniture retailer IKEA’s stores in Dublin and Belfast (pictured) will soon be powered by renewable energy following its plans to buy a new wind farm.

It is already being built by Irish energy firm Mainstream Renewable Power, which has been chosen to operate and maintain the plant for its 20-year life cycle.

Located in Carrickeeny, North West Leitrim, the 7.65MW wind farm – to be completed early next year – will consist of four turbines and have an expected annual production of 25GWh of electricity – equivalent to powering around 5,500 homes a year.

The news comes just a week after a Japanese firm invested €100 million for a holding in the renewable energy company.

IKEA will sell electricity generated by the wind farm to another Irish energy firm Vayu, which will supply it to the retailer’s stores under a 15-year contract.

Joanna Yarrow, Head of Sustainability IKEA UK and Ireland said: “Our investments in renewable energy not only help to reduce carbon dioxide emissions from our operations in Ireland but also, together with our energy efficiency efforts, help to control our electricity costs so we can pass any benefits to our customers by continuing to offer high quality home furnishings at low prices.”

“Producing our own, affordable, renewable electricity gets us one step closer to becoming completely energy independent by 2020, while ensuring our commercial success”, she added.

The IKEA Group aims to produce as much renewable energy as it consumes by 2020 and has set aside €1.5 billion (£1.3bn) for investments in clean energy up to 2015. The Irish Government has also set a target of achieving 40% of renewable generation by 2020.

Earlier this year the retailer officially plugged in its 38th solar system in the US.