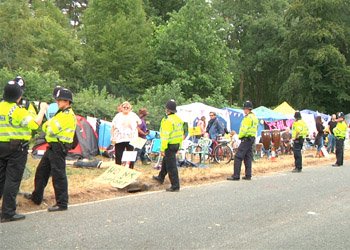 Fracking firm Cuadrilla is scaling back its oil drilling operations near Balcombe in West Sussex as an influx of up to a thousand extra protesters are expected to gather this weekend.

A climate camp planned to take place in Nottinghamshire is to be relocated to Balcombe, with police anticipating increased protest activity over the next few days.

Protesters have set up round-the-clock camp outside the drilling site for more than three weeks, stopping Cuadrilla trucks from going into the facility which has led to a total of 36 arrests so far.

A spokesperson told ELN the firm doesn’t intend on going into full production and frack at Balcombe but is conducting exploratory drilling on an old oil well to see if it could be economically viable. The past few weeks of protests have delayed the firm’s drilling operations at the site but this is the first time exploration has been called off because of the threat of direct action.

Cuadrilla said in a statement: “After taking advice from Sussex Police, Cuadrilla is scaling back operations ahead of this weekend’s No Dash for Gas event. During this time, our main concern is the safety of our staff, Balcombe’s residents and the protesters following threats of direct action against the exploration site. We will resume full operations as soon as it is safe to do so.”

Delighted at the news from Cuadrilla, Katriona Vetch, one of the village campaigners told ELN: “Well it’s a victory in itself that they’ve halted drilling until they deem it safe to drill again. But the main point of this weekend is the communities coming together from across Britain – from Northern Ireland, France and coaches from all across the country coming down to support Balcombe – and these are communities all affected by the unconventional oil and gas industry or threatened by it.

“There’s going to be a huge march on Sunday just to show the solidarity of communities coming together to fight these industries.”

Sussex Police said it has had to rely on help from forces outside for its daily operation and is preparing to take the necessary precautions this weekend.

Superintendent Lawrence Hobbs from Sussex Police added: “We have been contacted by one organiser and this is important as there are many aspects that need to be considered, not least arrangements for fresh water and sanitary arrangements at their chosen camp site.

“We will continue to facilitate peaceful protest but newcomers to the site should be aware that if they commit criminal offences then we will collect the evidence and they will be arrested.”

Earlier this week Prime Minister David Cameron spoke out firmly in favour of fracking for shale gas in Britain.