Thirteen environmental and justice groups walked out of the UN climate talks yesterday in protest at the “lack of progress” in tackling the climate crisis. More than 800 people from […] 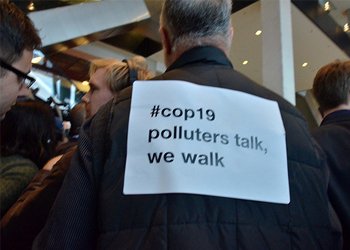 Thirteen environmental and justice groups walked out of the UN climate talks yesterday in protest at the “lack of progress” in tackling the climate crisis.

More than 800 people from organisations including WWF, Friends of the Earth, Greenpeace, WWF, Oxfam and 350.org, with the slogan “Polluters talk, we walk” stuck to their clothing (pictured), left the Warsaw National Stadium in Poland, where the UN COP 19 talks are being held.

They said developed countries have “blocked progress on cutting emissions and providing finance” for those impacted by climate change.

Although no deal is expected at the conference, they are meant to lay the foundation for a new agreement on cutting greenhouse gas emission in 2015.

In a joint statement, the groups said the climate conference is on track “to deliver virtually nothing”.

They added: “At the Warsaw Conference, rich country governments have come with nothing to offer. Many developing country governments are also struggling and failing to stand up for the needs and rights of their people. It is clear that if countries continue acting in this way, the next two days of negotiations will not deliver the climate action the world so desperately needs.

“Therefore, organisations and movements representing people from every corner of the Earth have decided that the best use of our time is to voluntarily withdraw from the Warsaw climate talks. Instead, we are now focusing on mobilising people to push our governments to take leadership for serious climate action.”

More than 9,000 representatives from around 195 countries gathered in the Polish capital for a two-week conference working towards curbing rising greenhouse gas emissions.