Scientists have confirmed 2016 was the hottest year on record and saw the planet near a 1.5°C warming. According to latest figures from the Copernicus Climate Change Service (C3S), part […] 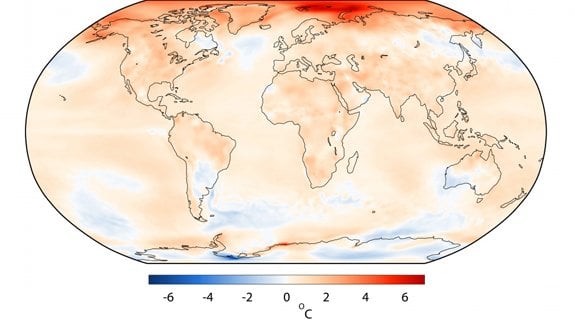 Scientists have confirmed 2016 was the hottest year on record and saw the planet near a 1.5°C warming.

According to latest figures from the Copernicus Climate Change Service (C3S), part of the EU’s Copernicus earth observation programme, global temperature exceeded 14.8°C last year and was around 1.3°C higher than usual.

Temperature last year was also close to 0.2°C warmer than 2015, which was previously the warmest year on record.

Countries agreed in Paris in 2015 to keep average temperatures to well below 2°C and to pursue efforts to limit the temperature increase to 1.5°C, which entered force last November.

C3S however found global temperatures in February 2016 already touched the 1.5°C limit, “though under the influence of a strong El Niño, an intermittent event involving a period of warming”.

Temperatures still remained “well above average” in the second half of the year, “associated partly with exceptionally low sea ice cover in both the Arctic and Antarctic”.

It adds future warming could cause billions of euros of damage each year and affect the availability of fresh water and crop yields in the most vulnerable countries.

Juan Garcés de Marcilla, Director of European Centre for Medium-Range Weather Forecasts (ECMWF) Copernicus Services said: “We are already seeing around the globe the impacts of a changing climate. Land and sea temperatures are rising along with sea levels, while the world’s sea-ice extent, glacier volume and snow cover are decreasing; rainfall patterns are changing and climate-related extremes such as heatwaves, floods and droughts are increasing in frequency and intensity for many regions.

“The future impact of climate change will depend on the effort we make now, in part achieved by better sharing of climate knowledge and information.”