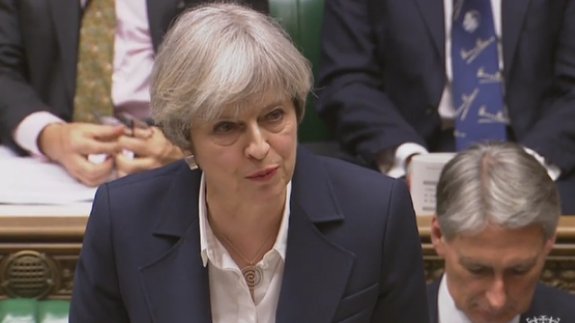 Prime Minister Theresa May speaks in the House of Commons on the signing of Article 50. Image: Parliament TV

A number of energy organisations have commented on Prime Minister Theresa May’s signing of Article 50.

It highlighted the mutual benefits for both the UK and the EU of co-operating on energy issues and deals.

The organisation said the development of the EU’s Internal Electricity Market has had significant benefits for consumers both within the EU and in the wider European Economic Area.

Eurelectric added it hopes to see the continued development of a larger, more integrated European electricity market, where the free and fair trading of electricity between both parties can be maintained.

The IEMA believes the UK’s decision to trigger Article 50 is a monumental and defining moment.

Martin Baxter, IEMA’s Chief Policy Advisor said: “Uncertainty, risk, opportunity – there is the potential to position the UK for long term sustainable success, mixed with concern that we will enter a long period of decline.”

Mr Baxter added there should be no decrease in the UK’s ambition to transition to a sustainable future and said Brexit must deliver economic and social value in a low carbon and resource efficient manner.

Green Alliance has highlighted the risks posed to the UK’s environmental protections by Brexit.

It states although some laws will be relatively easy to transfer across, a significant proportion will not, potentially causing serious cause for concern.

Green Alliance said: “The government should commit to a new Environment Act to fill the gaps left by Brexit and to put us on a clear course to restoring nature and cutting pollution in the UK.”