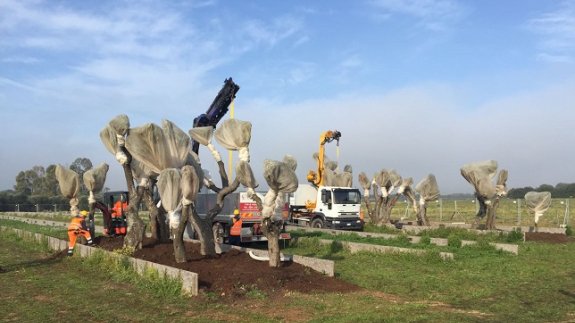 A number of trees being removed. Image: TAP

Italian protestors and police have clashed as olive trees are uprooted to make way for a controversial gas pipeline.

Around 2,000 trees in Puglia, some of which are centuries old, are expected to be pulled up and replanted to make way for the 545 mile-long Trans Adriatic Pipeline (TAP), which will bring natural gas from Azerbaijan into Italy.

Protesters have called for the $40 billion (£32.16bn) project to be re-routed so it avoids an area where people rely on tourism and olive oil for their livelihoods.

The digging up of the trees near the village of Melendugno was temporarily suspended but later resumed.

Gianluca Maggiore, one of the protest leaders, said: “Our battle is entirely legitimate and we have always wanted it to be peaceful but the response of the police was disproportionate.”

The regional government of Puglia is opposed to the pipeline and has stated it is “illegal”.

However, these objections have been overridden by Italy’s central government, which says the project is of huge strategic significance because it will allow Italy to diversify its energy supply away from coal, reduce emissions and rely less on Russian energy imports.

Gian Luca Galletti, the Environment Minister, said: “The project is fully in accordance with all law. We hope that common sense will prevail.”

TAP said: “This is a standard practice in the Region.

“In the Puglia Region alone, tens of thousands of olive trees are moved annually to allow the construction of infrastructure and energy projects, including roads and aqueducts.”