A waste plant in Switzerland has installed technology to remove carbon dioxide from the air and convert it into fertiliser. Climeworks’ Direct Air Capture unit on the roof of a waste […] 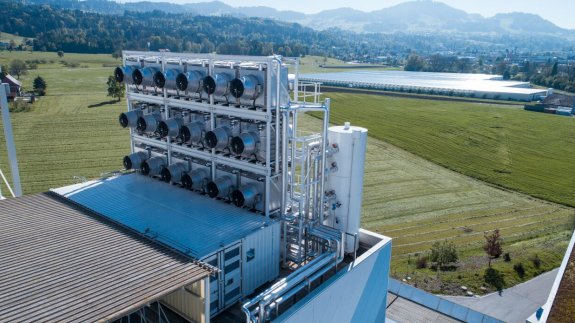 A waste plant in Switzerland has installed technology to remove carbon dioxide from the air and convert it into fertiliser.

Climeworks’ Direct Air Capture unit on the roof of a waste incineration plant in Hinwil, near Zurich, filters the greenhouse gas from the atmosphere and sells it to the nearby Gebrüder Meier Primanatura AG agricultural plant.

It is then used to fertilise crops – the company says it can increase the growth of vegetables such as tomatoes and cucumbers by up to 20%.

The system even saves energy by using excess heat from the waste facility as part of the conversion process.

The two facilities are within view of each other and the carbon dioxide is transported via a short gas pipeline, meaning the plant producer now longer has to receive shipments via long distance truck delivery.

Climeworks’ conversion plant was supported by the Swiss Federal Office of Energy.

Christoph Gebald, Managing Director at Climeworks, said: “Since our first visit here we managed to upgrade the capacity from a few millilitres per day in the lab to an industrial scale of 900 tonnes per year.”