Pingu says pack in the plastic this Christmas

This Christmas the UK will give an unwanted gift to the environment – plastic waste equivalent to the weight of 3.3 million penguins. That’s according to Wildlife and Countryside Link, […] 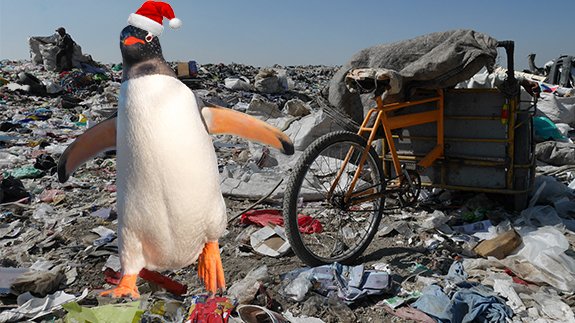 This Christmas the UK will give an unwanted gift to the environment – plastic waste equivalent to the weight of 3.3 million penguins.

That’s according to Wildlife and Countryside Link, a coalition of 47 voluntary organisations dedicated to looking after the environment.

It says bottles, boxes and other packaging often end up in the natural environment and harm animals such as whales and penguins.

It says around 114,000 tonnes of plastic packaging will be thrown away and not recycled this Christmas in the UK alone, in addition to approximately 88 square kilometres of wrapping paper – enough to cover either Brighton and Hove, Coventry or Swansea.

The total waste created across the country this Christmas from food and drink, packaging, wrapping paper, cards, Christmas trees and other rubbish, is likely to exceed five million tonnes – equivalent to around 450,0000 double decker buses.

Louise Edge, Oceans Campaigner at Greenpeace, said: “If oceans full of indestructible plastic waste isn’t what you asked for, write a letter to Santa letting him know.”