London ‘among cities sinking into the sea’ 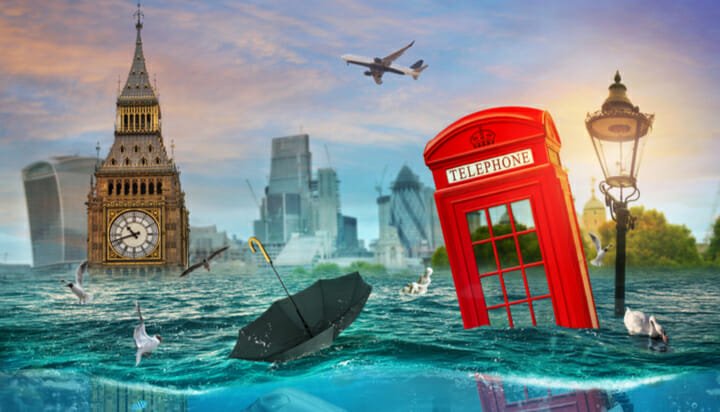 London is among the cities sinking into the oceans as climate change raises global sea levels.

That’s according to a new report from Christian Aid, which says Houston, Jakarta, Lagos and Shanghai are other coastal settlements set to become extremely vulnerable to severe storms and flooding.

The organisation expects the sea level to rise by around 40 centimetres if global warming is not limited to 1.5°C – it says this will particularly threaten increasingly populated regions on the edges of landmasses.

Its report claims around 40% of the Indonesian city of Jakarta lies below current sea levels and is subsiding at a rate of 25 centimetres a year – its natural sea defences like mangroves being removed has made it more vulnerable to storm surges.

Christian Aid says London is sinking partly due to glaciers in Scotland melting, resulting in these regions literally rising as the weight moves off them. This has resulted in London and the south of England sinking downwards in a see-saw motion, providing one factor as to why the Thames Barrier is having to be used increasingly often.

It also warns Nigeria’s capital Lagos could see 740,000 residents losing their homes if the sea rises by just 20 centimetres, with the government threatening to fine and imprison people who drill boreholes to access water without authorisation.

Dr Kat Kramer, Christian Aid’s Global Climate Lead, said: “These global metropolises may look strong and stable but it is a mirage. As sea levels rise, they are increasingly under threat and under water.”