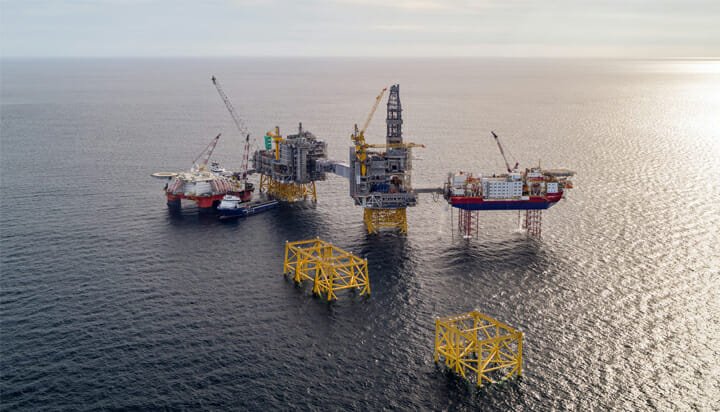 A power-from-shore solution that will provide the Johan Sverdrup oil field with electricity for more than 50 years has officially been launched.

Norwegian Petroleum and Energy Minister Kjell-Børge Freiberg flicked the switch yesterday, making the development significant because with electric power supplied from shore, operations at the giant oil field can be run without the use of fossil fuels.

Developer Equinor says cutting out the need for gas turbines at sea makes it one of the most carbon-efficient fields worldwide.

Power from the shore is expected to help reduce emissions by around 460,000 tonnes per year – equivalent to the emissions of 230,000 private cars annually.

Johan Sverdrup is one of the five largest oil fields on the Norwegian continental shelf, with expected resources of between 2.1 and 3.1 billion barrels of oil equivalent.

The first phase of the field is expected to start up in November 2019, with production capacity estimated at 440,000 barrels of oil per day.

Jez Averty, Senior Vice President for Operations in the south of the North Sea said: “With estimated resources of up to 3.2 billion barrels and a production horizon of more than 50 years, it is key that Johan Sverdrup production is as effective as possible with the lowest possible emissions. Low carbon production is a key element of the company’s strategy and fully aligned with our roadmaps for climate and for the Norwegian continental shelf.”