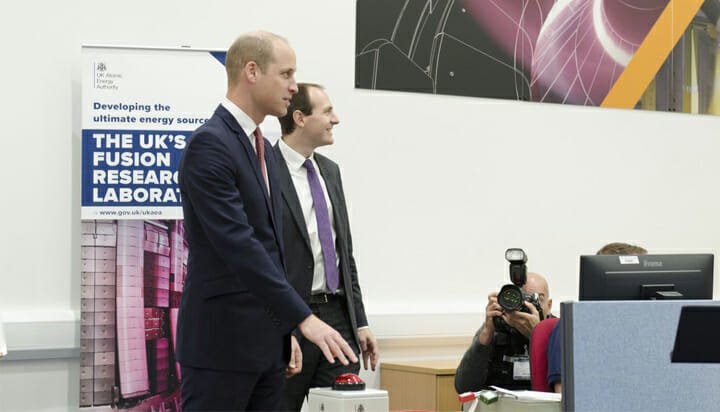 Prince William was “left in awe” as he marked the end of construction of the UK’s new nuclear fusion energy experiment with a visit to the Culham Science Centre near Oxford.

The Duke of Cambridge took a tour of the UK Atomic Energy Authority’s (UKAEA) research lab, home to the £50 million MAST Upgrade project, which scientists believe could potentially be a “life-changing world energy project”.

Fusion energy research aims to copy the process which powers the sun for a new large-scale source of clean energy on Earth.

Prince William heard about the five-year project to build a machine capable of creating artificial stars and how in a few months’ time, temperatures of 50 million°C will be created – more than three times hotter than the sun.

He also ran a test of a “plasma” – the hot gas that will form inside the MAST Upgrade when it operates – to help the team condition the machine as they prepare for the first scientific tests in 2019.

The project will explore whether smaller reactors – the so-called “spherical tokamak” design – could make future fusion power cheaper and trial a novel way to exhaust heat from the large fusion reactors which are expected to be on the grid by the middle of the century.

UKAEA CEO Professor Ian Chapman said: “It was a privilege to welcome The Duke of Cambridge to Culham as we prepare to start a major new fusion experiment.

“The report from the Intergovernmental Panel on Climate Change last week reminded us how badly the world needs cleaner energy. We think fusion has a big role to play. The fuels are abundant around the globe, it doesn’t release greenhouse gases and it doesn’t produce long-lived radioactive waste like the nuclear fission power we have today. Building a star on Earth is very difficult – but the research is fascinating and knowing that we could change the world is a big motivation.”