The Dragon Energy Island project would generate a combination of marine, solar and hydrogen energy 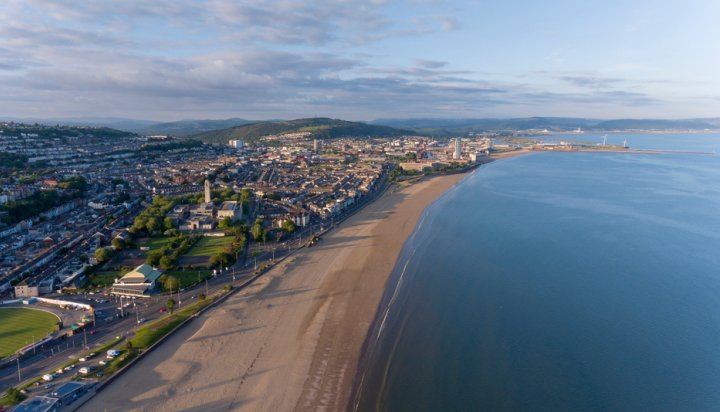 A floating island of up to 1,000 homes and shops is part of a new proposal to revive the Swansea Bay Tidal Lagoon project in Wales.

Called Dragon Energy Island , the project would consist of giant underwater turbines that would power thousands of homes across Swansea and beyond, a floating modular homes development, underwater data centre, a solar farm and the production of hydrogen.

Another element is the potential for a public procurement arrangement which could see councils and other public sector organisations buying electricity directly from the energy island.

The new scheme is seen as a replacement for the tidal project in Swansea Bay, which failed to receive support from the UK Government.

A report commissioned by a Swansea Bay City Region task force found the latest plan for the tidal lagoon is “financially viable” as it is 30% cheaper than the £1.3 billion estimated cost of the previous project – but it does not take into account the homes, shops, solar farm and data centre.

Rob Stewart, Swansea Council Leader and Chairman of the city region’s task force said there was “huge support” to deliver the lagoon.

He added: “Despite the UK Government not backing the previous proposals, we never gave up hope on the opportunity to deliver a major renewables project in Swansea Bay… The new proposal is a larger and more ambitious renewable energy development that’s built upon the natural tidal benefits of Swansea Bay and complimentary technology to generate zero-carbon power.

“The tidal lagoon is at the heart of the new proposal and gives us the opportunity to create a new floating community of homes and businesses within the sea wall. This has already been successful in countries like Holland, Germany and Denmark, providing a sustainable solution to issues including population density and climate change.

The report will be discussed by Swansea Bay City Region’s joint committee later this month.