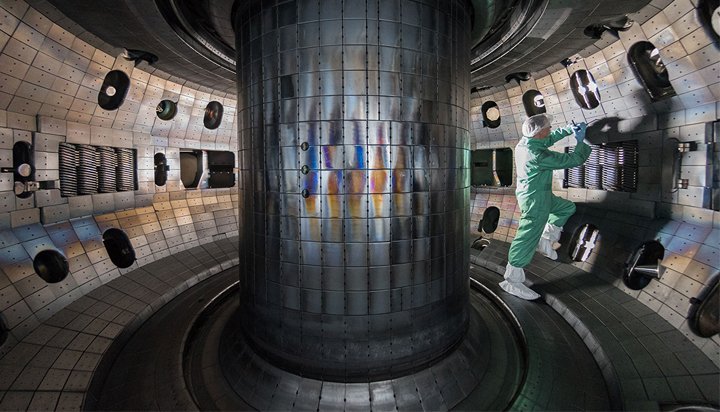 The inside of the tokamak at the DIII-D National Fusion Facility in San Diego. Image: General Atomics

The US Government has announced funding worth $14 million (£11.5m) for university-led research programmes into nuclear fusion energy.

The 10 projects will use the DIII-D National Fusion Facility in San Diego, which is a laboratory that explores a wide range of topics including how future fusion power plants will work and is operated by General Atomics for the Department of Energy.

It hosts researchers from more than 100 institutions across the globe, including 40 universtities.

The heart of the facility is a tokamak that uses powerful electromagnets to produce a doughnut-shaped magnetic bottle for confining a fusion plasma.

In DIII-D, plasma temperatures more than 10 times hotter than the Sun are routinely achieved. At such extremely high temperatures, hydrogen isotopes can fuse together and release energy.

A major goal of the research is to develop methods to sustaining steady-state or continuous operation of fusion reactors, an essential step towards eventually making nuclear fusion a practical energy source.

Projects range from developing new means of controlling plasma instabilities and improving diagnostics, to advancing understanding of the material erosion that takes place inside fusion reactors.

Under Secretary for Science Paul Dabbar said: “Fusion remains one of the world’s most promising potential sources of energy. This research—aimed at achieving steady-state operation of fusion reactors—will be an important milestone on the road to sustainable energy from fusion.”