UK Energy Market Report written by Pulse Business Energy. Pulse is an award-winning Business Energy and Water Broker who can advise on every aspect of usage and procurement for electricity, gas and water. 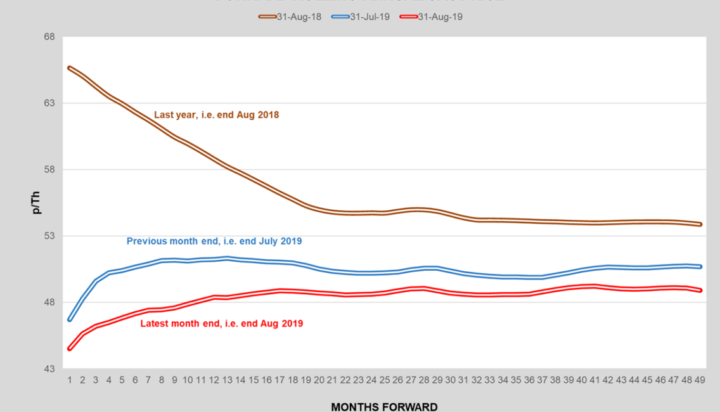 The contrast with August last year could not have been much greater; this time last year prices were relentlessly increasing whereas this year, UK’s energy prices have been dropping, with forward curves for rolling-annual prices also developing their contango – indicating an underlying weak sentiment in the market- again a further contrast to last year’s backwardation.

£/€ FX exchange rates were surprisingly supported, bearing in mind the continued uncertainty surrounding Brexit – perhaps we are at long last going to have a proper debate in Parliament – just when you thought the Government seemed to have a plan. Oil prices continued to be volatile, yet coal and CO2 prices dropped due to lower energy demand.
In effect, we are still experiencing the consequences of the very comfortable European gas inventory position, which shows no sign of abating; unless we experience some significant supply shock, this is likely to keep prices under pressure for the immediate future.

UK Gas, was perhaps the main driver pushing UK energy prices this month, aided and abetted by what can only be described as a mundane summer, particularly in contrast to last year’s extreme summer. With the rush in July to close next gas-year’s fixed price contracts now practically over, the buying demand dropped, and the market reverted to usual supply demand fundamentals. Summer maintenance schedules also started coming to an end and so surplus gas had to find a home in the market, at a time when gas inventory levels are already at record levels. The following chart is very telling and shows EU gas storage levels higher than we’ve seen during recent years, which will keep downward pressure on prices. 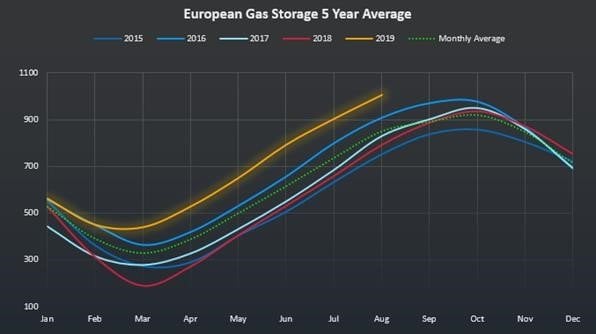 Historically, such high inventory levels have led to lower prices for the subsequent year. LNG deliveries to EU have started to pick up again also, ensuring continued supplies even during maintenance inspired supply restrictions. The forward curve for rolling-annual gas prices shows increasing contango as a consequence, demonstrating the market is structurally weak for the time being.

As we move in to autumn, changing weather and winter forecasts will become the driver. 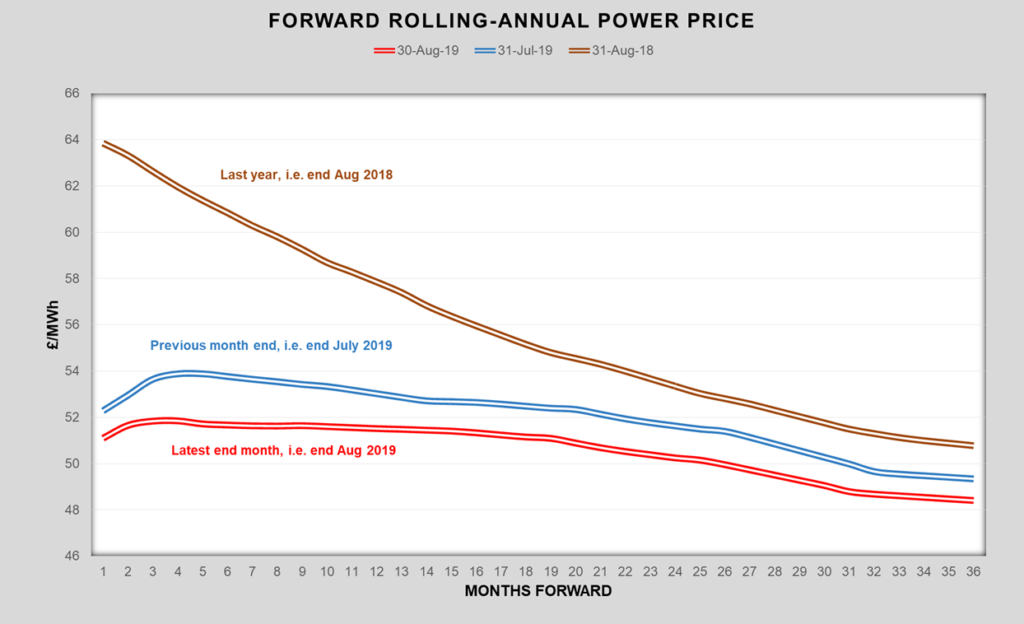 UK’s power prices took their lead from gas again during August 2019, though of course there is increasing reliance on wind-power production to meet base demand. One of the consequences of UK’s increased reliance on intermittent renewable generation will be higher prices in extreme weather and demand situations – so the future direction of power prices will be increasingly influenced by changes in weather forecasts – something we will be watching more, over the coming months. Despite increasing levels of solar electricity production, in truth still not that significant, gas-fired generation is still critical to satisfy the day-day demand balance.

From a structural perspective, sentiment is weakening, implying weakening prices over the medium term, though these prices will probably be more volatile than gas prices.

Oil prices were reasonably volatile during August 2019, because of a variety of mainly politically based issues; mostly middle-east related (Iran sensitivities and OPEC) from a supply perspective and Chinese issues (i.e. US-China trade talks) from a demand perspective. Fundamentally, however, the oil market has, in reality, changed little recently. While analysts generally expect prices to drop slightly in the short term, medium term expectations are more uncertain; potential supply disruptions an upside risk and global economic concerns providing downside risks.

Most market signals continue to be bearish and any hint of a sentiment change last month, when there was a rush of buying to cover 2019/20 contracts, has essentially disappeared. UK energy prices are being driven by gas availability, which still looks good, primarily due to the ample inventory levels. However, Brexit inspired sterling weakness may put a floor under, or even increase, prices in the short-term.

One key factor going forward will be what the expectations are for future weather conditions. Autumn forecasts currently imply a normal to mild September and October, with only some risk of a slightly colder November, though nothing extreme. Initial signs for winter are a slightly colder than usual January and February, however, if gas inventories remain high the impact on prices may not be significant. As usual, the key weather issue is when the cold temperatures start and, so far, an early cold snap isn’t forecasted.

At Pulse, we are always keeping a close eye on the energy market and to see how we may be able to help you with our energy broker services, please click here