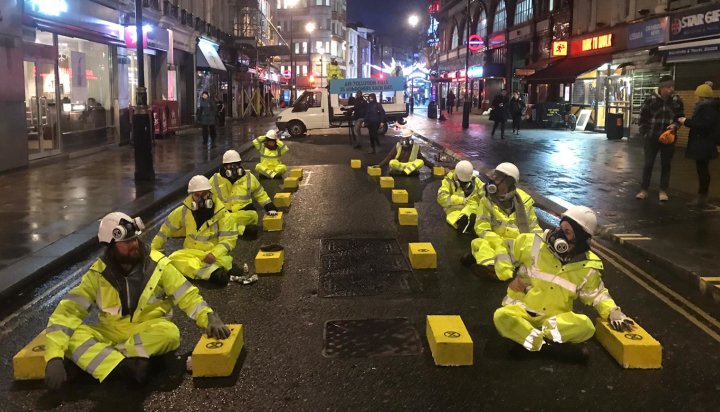 Extinction Rebellion activists have blocked traffic on Cranbourne Street in Leicester Square as part of air pollution protests being held across the country.

Members of the controversial campaign group glued themselves to concrete blocks on the road in the early hours of this morning in order to raise attention regarding the dangers of air pollution and fossil fuel transport on “a highly polluted street in London”.

The group notes two million people are living in areas with illegal air pollution in London today, including 400,000 children.

Claiming toxic air contributes to between 28,000 and 36,000 deaths a year across the UK, the protestors say they are trying to demand action on climate change from the next government ahead of Thursday’s general election.

The move comes as part of “12 days of crisis” planned by Extinction Rebellion – today there are also a number of campaigners stopping traffic from passing on Great Ancoats Street in Manchester and yesterday the group caused disruptions at Heathrow Airport after around 300 protestors blocked roads to campaign against the proposed new runway.