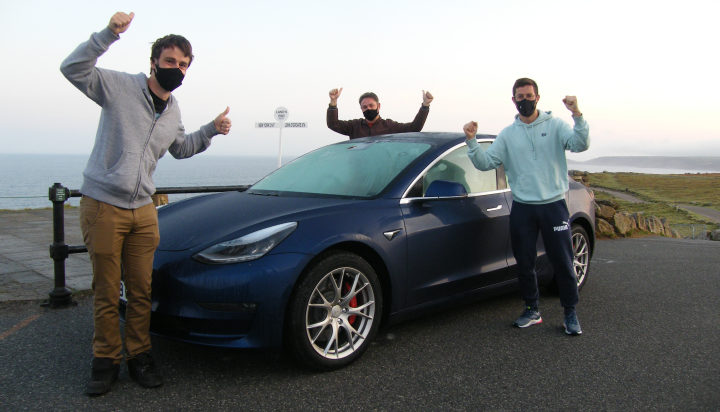 A UK charity has set a new record for the shortest charging time in an electric vehicle (EV) while driving from John O’Groats to Land’s End.

Three representatives from Zero Carbon World achieved the record-breaking time of one hour 31 minutes and 32 seconds on 12th September 2020, smashing the old record by more than two hours.

The previous record was set in 2015 and stood at three hours 44 minutes and 33 seconds.

They stopped to charge at three IONITY stations in Perth (Perth and Kinross), Gretna Green (Dumfries and Galloway) and Cullompton (Devon), along with one Tesla supercharger station in Essington (South Staffordshire), making sure not to overcharge the car at any time.

Mr Fielding said: “We’re ecstatic to have achieved this incredible time, which is less than half that of the previous record.

“Despite out planning for the record attempt, we feel that this achievement demonstrates that many EV drivers could easily make the trip without significant planning – just plot it in their satnav and go. Lots of EVs use the CCS [combined charging system] charging standard that we used along the way.

“The UK charging infrastructure has improved to a degree where such trips can be made, making EVs a viable and practical alternative to ICE [internal combustion engines] vehicles. What’s even more remarkable is that the software used to calculate the trip suggested we would need one hour and 31 minutes of charging and that’s exactly what we did. The capability to accurately predict real-world journeys helps eliminate the anxiety many feel about EVs and range.”