How could an electric school bus decarbonise the grid? 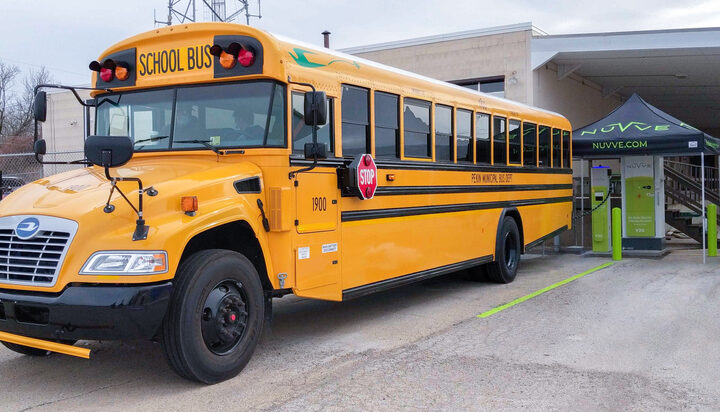 An electric school bus in Illinois, US, can now not only offer greener transport to children but also support the US power grid.

School bus manufacturer Blue Bird Corporation has delivered a fast-charge vehicle-to-grid (V2G)-capable school bus in what is claimed to be North America’s first commercial application of this technology.

But how does it work?

Technology company Nuvve Holdings has developed a system that allows the school bus battery to store energy, including renewable from wind and solar, when the grid doesn’t have a need for it.

That could allow fleets to sell stored energy from the school bus batteries to the grid when demand calls for it.

The Nuvve V2G system can also be used to supply energy back to a school and smart-charge the buses during non-peak hours to reduce energy costs.

Daniel Jost, Fleet manager for the City of Pekin, said: “Not only are we improving the health of our students, drivers and communities by reducing emissions, but our V2G capabilities allow us to store clean electrical energy and to generate revenue by reselling unused energy back to the grid during peak demand.”

Gregory Poilasne, Chairman and Chief Executive Officer of Nuvve, commented: “Our system allows electric school buses to perform to their fullest potential by providing grid services when plugged in and charging.

“This reduces the load on the grid and will make emergency backup power from buses a reality in the near future.”