The protesters call on Church Commissioners to divest from fossil fuels 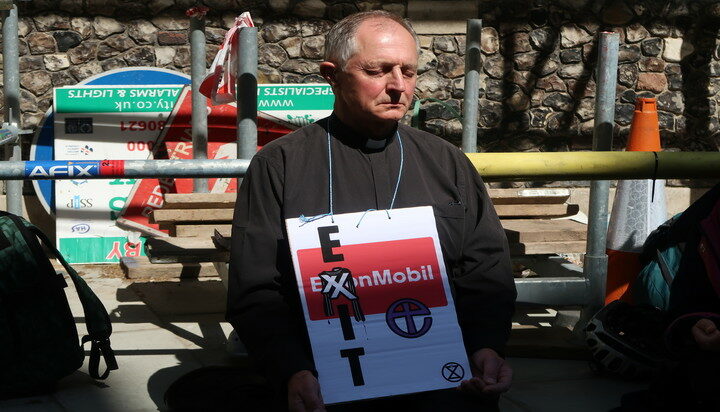 Clergy and climate activists have today glued themselves to furniture in the reception of Church House in London to protest over the alleged investments of the Church of England in ExxonMobil.

They are calling for an immediate fossil fuel divestment.

Rev Tim Hewes, a retired vicar from Oxfordshire, said: “I am taking this non-violent direct action against the church commissioners and the pension board today, because of their persistence in investing in fossil fuels.

“It is grossly irresponsible and obscenely irreverent use of money donated by parishioners. I am consumed with planet grief and unspeakably angry that the church to which I have sworn allegiance acts in a way that is alien to the doctrine of the Trinity: the Trinity from which God’s love flows over all creation.”

A spokesperson for the Church of England, said: “We were aware there was going to be a peaceful protest, and respect and agree with the views of the participants that there is a climate emergency.

“We were concerned for the wellbeing of the protesters and our Church House staff, who worked to bring the protest to a peaceful conclusion.”