The company pleaded guilty to two charges at an earlier hearing and in response to the incident, Yorkshire Water placed aeration equipment in the Mother Drain 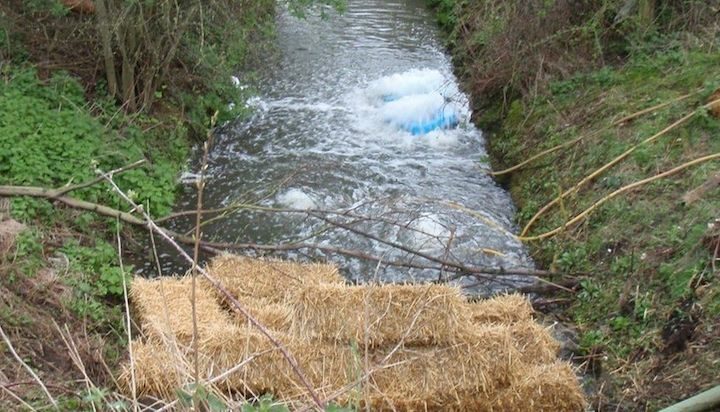 Pollution being contained in the Mother Drain. Image: Environment Agency

Yorkshire Water Services Limited has been fined a total of £150,000 for illegally discharging sewage effluent into the Potter Carr Nature Reserve.

The company pleaded guilty to two charges at an earlier hearing – causing sewage sludge to enter a tributary of the Mother Drain and breach of permit condition relating to ammoniacal nitrogen levels in their final treated sewage effluent.

While Yorkshire Water holds an environmental permit that authorises water discharges from x, that is only permitted under a number of strict conditions.

On 28th March 2017, Environment Agency officials confirmed pollution of the Mother Drain at the Potter Carr Nature Reserve after it was reported by Yorkshire Wildlife Trust.

They saw small pieces of toilet paper floating in the water – which looked grey – and sample results confirmed high levels of ammoniacal nitrogen in the water.

Due to the severity of the pollution, the Environment Agency requested the Internal Drainage Board to switch off a pump station used for land drainage.

Yorkshire Water later explained a valve failure on 27th March 2017 had led to a settlement tank on site draining sewage sludge but the company did not contact the Environment Agency because it thought effluent was contained on the site.

It added electrical damage caused by the incident affected parts of the works and disrupted the biological treatment processes, which resulted in a deterioration of the treated sewage effluent quality.

In response to the incident, Yorkshire Water placed aeration equipment in the Mother Drain, following which the Environment Agency continued to investigate and monitor the effects of the pollution for over a week and found no sign of dead or distressed fish.

A spokesperson for the Environment Agency said: “Water companies are aware that their activities have the potential for serious environmental impacts, and they know that we will take action when they cause pollution. In this case Yorkshire Water has failed the environment, customers and the system of environmental laws the public puts its trust in.

“Polluters must pay, the Environment Agency will continue to do everything in its power to ensure that they do.”

Yorkshire Water was also ordered to pay costs of £36,506, in addition to the fine.

A spokesperson has been quoted as saying: “We take our responsibility to look after the environment very seriously and we are sorry this incident occurred.”