The Solar Boom – is it time for businesses to get onboard?

The UK is on course to double its solar capacity by 2030, with widespread innovation and technological developments across the renewables sector. 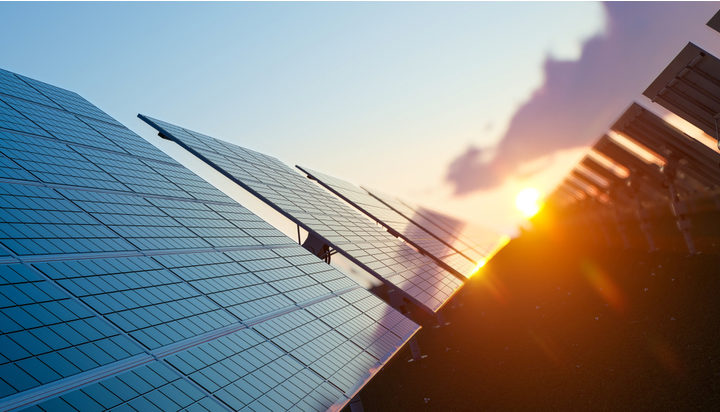 There’s been an exponential rise in global demand for solar power throughout the pandemic. The sector grew by 50% in 2020 compared to 2019, making it one of the success stories of the year.

Solar energy generation projects are cropping up at a rapid pace across the country. This is despite the dual challenges of the pandemic and the ending of subsidies in 2019.

Construction will soon begin on the UK’s biggest solar farm, which was approved by the government in May last year. The 900-acre site in Graveney, Kent, will house almost 900,000 solar panels and produce enough power for more than 90,000 homes.

In Hertfordshire, Cambridgeshire and Essex, applications for solar farms have more than doubled in the past five months.

And activity isn’t just localised to England. Scotland, Wales and Northern Ireland, are witnessing a solar boom, with one of Scotland’s most recognisable landmarks, the Falkirk Wheel, getting 85 solar panels installed as part of Scottish Canals’ net zero targets.

As the government and businesses continue to turn net zero commitments into tangible actions, it’s difficult to imagine a scenario where solar doesn’t feature heavily in the mix. But there’s still considerable work to be done. According to a report from Solar Power UK, the UK solar industry needs to treble in size if it is to align with the Climate Change Committee’s (CCC) recommendations of hitting 40GW of installed capacity by 2030.

Part of the solution lies in more businesses investing in renewable generation. For most, this means installing solar panels onsite. These are often installed on rooftops, where they don’t take up space that’s being used for other aspects of the business’ operations. Self-generation provides a cost-efficient way to reduce energy consumption and a business’ carbon footprint, while also creating a potential revenue stream. Solar power makes good commercial sense because it can generate free, clean energy during daytime hours for use onsite and any surplus power can be sold back to the grid.

Businesses should also consider the impact self-generation through solar power can have on their brand and reputation. Many businesses are now being asked to prove their green credentials throughout the supply chain. In some industries, renewable energy and other sustainable practices are now a prerequisite for doing business. Suppliers with a poor environmental performance risk being struck off, losing out to those who are more sustainable.

So why aren’t more businesses taking advantage of the benefits solar brings?

Aside from the initial investment needed – which companies can recover through energy savings – one of the perceived barriers for businesses is site compatibility. Many businesses rent their premises and assume that this prevents them from investing in renewable infrastructure. However, this needn’t be the case.

At Drax’s rented Ipswich office, we’ve installed solar panels on the building’s south-facing roof and a semi-permanent 80kWh battery storage unit outside. The combination of the solar array and battery storage has given us unprecedented control over the office’s energy usage, allowing the team to get tactical with our power management.

Dedicated energy partners like Drax can simply the process, taking businesses through the entire process from compatibility assessment, to the installation of renewable technology and helping them to find a power purchase agreement (PPA) that best suits their needs.

Going forward, solar power’s vital role on the road to decarbonisation will only grow. For businesses committed to reducing their environmental impact, it’s time to take notice of this growth, and consider whether it’s time to take the next step and generate their own electricity.

It’s believed that covering the roof of every south-facing warehouse, factory and office with solar panels would meet the needs of the UK’s entire electricity demand. So, the impact and value of onsite solar panels is clear. While a rollout of solar on this scale is very unlikely, we need to encourage more businesses to explore onsite solar power as an option if the UK is to meet its net zero targets.