Six activists have barricaded themselves inside British Gas offices, according to reports. The protesters are campaigning against fuel poverty and what they claim is “Big Six profiteering”. The protestors have […] 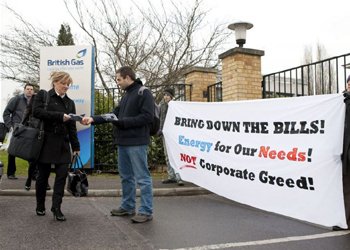 Six activists have barricaded themselves inside British Gas offices, according to reports. The protesters are campaigning against fuel poverty and what they claim is “Big Six profiteering”.

The protestors have been at the energy supplier’s building in Staines, Middlesex since this morning and appear to have handed flyers to staff and strung a banner across the main entrance.

Protestor Hannah Edler, 27, said on the Fuel Poverty Action blog: “Heat or Eat is a choice no-one should have to face. The Big Six energy companies are raking in record profits while our bills rise… We’re here to put ourselves in the way of this shameless profiteering.”

British Gas defended their energy prices in a statement today: “We recognise the impact that higher energy prices are having on household budgets. That’s why British Gas has announced a series of measures to help customers through the winter, including a cut in electricity prices, a hold on prices overall, free insulation and help for eligible customers to claim the Warm Homes Discount.”

The spokesperson added British Gas is working closely with the police “to ensure the safety of our employees, the general public and the protesters.”

Surrey Police confirmed their officers were on the scene shortly before 9am following reports of a small group of protestors gained access to a British Gas office building.

A police spokesperson said: “Police are working closely with British Gas to resolve the situation as quickly and safely as possible.”