IEA warns industry to open up over future of gas

The ‘golden age of gas’ will become a reality only if industry and authorities are transparent over the “legitimate public concerns” surrounding the environmental and social impacts of new sources. […] 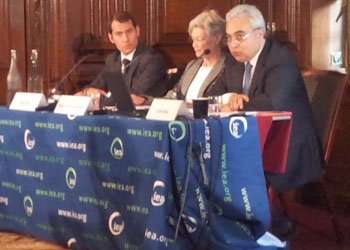 The ‘golden age of gas’ will become a reality only if industry and authorities are transparent over the “legitimate public concerns” surrounding the environmental and social impacts of new sources. This was the message from the International Energy Association, which believes industry must be kept in line if the world is to benefit from such a transition.

Unconventional gas reserves, such as shale gas and methane, have become the energy world’s panacea for some- less polluting than coal and oil, the untapped reserves of gas could provide energy security and meet demand easily, the IEA says. The way unconventional gas is produced is very similar to that of conventional gas, but more wells are generally needed and controversial methods such as hydraulic fracturing are used.

The regulation of what the IEA calls the “unexpected arrival” has led to stinging criticism from environmental groups and the public in general.

IEA Executive Director Maria van der Hoeven (centre) told ELN: “The most important thing is public acceptance. To get this, I think industry needs to be very transparent on what they are doing and where they are doing things. They have to watch their wells. They have to do everything they can do to prevent leakages. They have to be clear over what type of chemicals they use in the procedure.

“If you really want to achieve this golden age of gas… you have to see to it that industry fully operates according to rules and that’s something that was a problem in the United States.”

The IEA’s new report sets out several ‘golden rules’ which it thinks will allow governments and industry to address the environmental and social impacts of unconventional gas. These include being more open about the processes and environmental awareness.

The intergovernmental organisation estimates global unconventional gas production could triple between 2010 and 2035 to 1.6 trillion cubic metres. If their ‘golden rules’ are not followed the agency fears CO2 emissions could rise by 1.3%.