Chancellor George Osborne’s £500 million hand out for the North Sea this morning has been slammed as “completely bonkers”. Announcing the tax relief on the same day subsidy for onshore […] 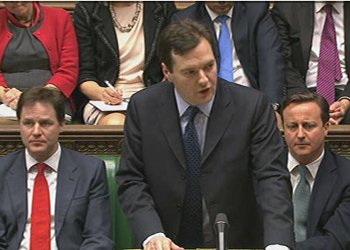 Chancellor George Osborne’s £500 million hand out for the North Sea this morning has been slammed as “completely bonkers”.

Announcing the tax relief on the same day subsidy for onshore wind was cut by 10%, Mr Osborne suggested it will give investors in the UK Continental Shelf long-term confidence.

Mr Osborne said: “Gas is the single biggest source of energy in the UK. Today the government is signalling its long-term commitment to the role it can play in delivering a stable, secure and lower-carbon energy mix. Today’s news is a further sign of the Government’s determination to get the most out of a huge national asset.”

But Greenpeace Head of Policy Doug Parr slammed the move. He said: “Osborne’s going to hand over hundreds of millions of taxpayers’ money to the polluting and pricey gas industry. This is clearly bonkers, for economic and environmental reasons.

“This is all made worse because clean offshore wind power, which is a cutting edge industry that could provide thousands of jobs here in the UK, will receive far less backing from Osborne’s Treasury than the dirty gas industry.”

The Chancellor first signalled the support for marginal gas fields when announcing the last Budget (pictured) after the oil and gas industry complained a North Sea tax raid could make it financially unviable to continue work at some fields.

Chief Executive Malcolm Webb said: “New shallow-water gas fields in the UK… have particularly high capital costs and are subject to 62% tax on production… we believe that the measure should trigger the development of specific gas projects involving expenditure of £2.4 billion, the creation of 4,000 British jobs and £600 million of additional tax revenues for the public purse.”

He called on the Chancellor to use new powers to bring in a brown-field allowance to promote investment in existing fields.