At the moment they’re mainly used by big brands like Puma and Ralph Lauren to try and sell products – but the Government thinks the black and white QR codes, […] 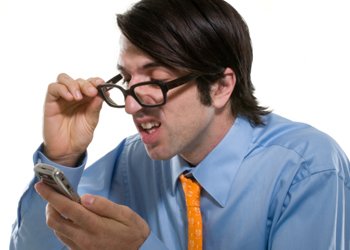 At the moment they’re mainly used by big brands like Puma and Ralph Lauren to try and sell products – but the Government thinks the black and white QR codes, which smartphones scan to give users more information, could go onto energy bills.

So if the codes eventually work their way onto household energy statements, how would they work – and would people use them?

“Customers could instantly view detailed breakdowns of energy usage, comparisons of usage between months and even submit payments towards their bill totals,” believes Nial Chapman at code designer QRPro.

To compare energy tariffs, he suggested, “The QR codes could push consumers to a mobile website that shows their energy usage (tied in to the presented bill) and associated cost that they are paying, alongside comparison costs from other energy firms for the same usage patterns. This could then direct users to services which facilitate the easy switching between energy suppliers.”

Although using codes on bills could “prove a success”, he told ELN there could be drawbacks: “The QR code usage in the UK is at present variable and very much depends on the information/service that the user will access when scanning the code (i.e is the QR code worth scanning).”

So will people with smartphones bother to use QR codes to pay bills? “I doubt it,” said Mark, a travel consultant from Muswell Hill, “it’s easier just to set up direct debit.”

Others thought QR codes on bills were more practical than on adverts in the street. Dan, a salesman from London told ELN: “I think it would be quite a good idea actually, I don’t use it [QR code scanner on my phone] on the street because I think it’s a bit annoying but if I was at home I probably would.”

They’ve been around for a couple of years now, with mainstream brands like supermarket Tesco introducing its first QR-code enabled print advert in 2010. It remains to be seen whether DECC will force energy firms to bring them in later next year.