Bristol’s first plant that produces energy from food waste has officially been opened today. The Anaerobic Digestion (AD) plant is expected to produce 10GWh of energy a year using biogas, […] 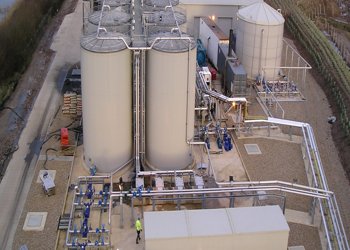 The Anaerobic Digestion (AD) plant is expected to produce 10GWh of energy a year using biogas, which could power around 3,000 households. It is expected to treat 40,000 tonnes of food waste from homes, supermarkets and businesses that would otherwise go to landfill.

The plant was built by Monsal, whose previous project includes an AD plant in Kings Lynn (pictured) and GENeco, a recycling and renewable energy firm and subsidiary of Wessex Water will operate it.

Charlotte Morton, Chief Executive of the Anaerobic Digestion and Biogas Association (ADBA) said: “This is an excellent example of the entrepreneurial potential of the UK’s water sector, demonstrating just how much can be produced from our waste food through anaerobic digestion, not only helping Wessex Water to significantly reduce its carbon footprint but also making a valuable contribution to improving the UK’s energy and food security.”

AD has the potential to deliver 10% of the UK’s domestic gas demand, with around 60% of it coming from the food waste, according to statistics from the ADBA.