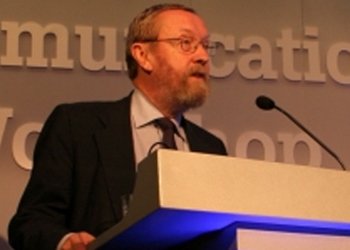 The UK Government’s chief scientist has warned time delays in the climate system means that greenhouse gas emissions in the atmosphere now will determine the weather the world experiences for the next 25 years.

Sir John Beddington (pictured) said climate change is one of the things he has been trying to bring to the Government’s attention but believes it is not talked about enough. He also noted the climate and weather we’re experiencing now comes from greenhouse gases that were in the atmosphere 25 years ago.

He said the international community’s failure to agree binding targets for cutting carbon emissions meant problems were being stored up for the future. He told BBC Radio 4: “They may reach agreement and they may start to reduce greenhouse gases in the next five years, or it may be a little longer. But they are still climbing and when that increase is reversed, we will be left with the weather and the climate for the next 25 years from whenever that happens.”

Sir Beddington added: “You can think about mechanisms… carbon dioxide, carbon capture and storage, those things are very withdoing. But I kind of emphasise more on the time delays. I think the key here is this is sort of a simplistic way of thinking about it, that’s a nice indicator. But there are other things going on. For example, one of the results of the climate analyses is saying we do except more variability and we are seeing more variability… The Arctic is likely to be warming more than other parts of the planet. So I think that the issue in a sense needs to be taken out of a very simple, simplistic thing.”

He said the world faces huge problems of food, water and energy security as global population increases, which will be inevitable in the near future.

The head of the Global Warming Policy Foundation (GWPF), however, said he is sceptical about anyone being able predict what the climate would be like in the future.

Director Benny Peiser said: “No one knows whether next winter will be warm or cold or average, no one knows whether next summer will be hot or wet or dry. It’s very, very difficult to make long-term predictions and therefore, I remain rather sceptical about the reliability and accuracy of these kind of speculation. They are pure speculation, they are not based on any hard facts, it’s an assumption.”

Mr Peiser added setting an international target would be the only way to limit emissions. However, he said that would not happen as it would mean countries like China and India would have to stop exploiting fossil fuels.

“It would mean to stop their economic growth and development. They can’t afford that. The negotiations have been going on for 20 years and they have been against it. So just because John Beddington says Government should take action doesn’t mean anything for them. It’s business as usual… They are using cheap energy because it’s the only way to develop”, he said.

He suggested Governments need to spend more money on preparing for extreme weather conditions and be more resilient.

“The only realistic and pragmatic approach to the issue of climate change and extreme weather events like droughts or flooding is to make countries throughout the world more resilient so that they can cope better. If you can heat your home in the cold winter, then that’s not a big problem. If you can cool your home in a hot summer, then that’s not a problem. If you have houses that can withstand storms, then we don’t have a problem.

“We need Governments to spend more money on real solutions and not foolish policies like wind farms that have no effect on the climate whatsoever. They are a waste of money and are not helping anyone other than the landowners making millions out of the subsidies. The real policy that has an effect and that will help people is to realise that whoever is right on CO2, there will always be flooding, there will always be drought and we need to prepare for these events and make our societies more resilient.”