Campaigners today criticised Drax’s plans to convert half its power stations to biomass by demonstrating outside the energy generator’s annual general meeting in London. Loudly chanting slogans, the protestors held up […] 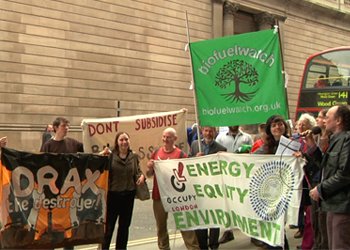 Campaigners today criticised Drax’s plans to convert half its power stations to biomass by demonstrating outside the energy generator’s annual general meeting in London.

Loudly chanting slogans, the protestors held up banners reading “Drax the Destroyer” and “Big Biomass Greenwash not Renewable Energy”. They said they wanted to highlight the impacts of biomass such as increased deforestation, land-grabbing and carbon emissions.

Oliver Munnion from Biofuelwatch, which organised the protest said: “I’m here today to dispel a modern myth that big biomass is sustainable, low-carbon energy. Drax isn’t going green – it’s cashing in on massive subsidies to the tune of half a billion pounds a year and trying to keep its old, dirty power station going for as long as possible. You can’t paint a green façade onto the UK’s most polluting power station. Big biomass and coal spell disaster for communities and the climate – it’s time these dinosaurs closed.”

Drax however disagreed and told ELN that biomass has a lot of potential to produce low carbon power in the future and that the company sources the fuel source in a sustainable way.

Peter Emery, Production Director at Drax said: “Biomass is an excellent renewable fuel. We purchase all our biomass from sustainably managed forests. The biomass we take is predominantly wood. What we do is we take thinning and residues from forests and what that means is we take a proportion of the trees when they’re immature which helps balance the trees to full maturity and to grow faster. So in many ways in taking biomass out we do actually encourage the forest to grow faster and increase the carbon it absorbs.”

According to the Biofuelwatch group, Drax’s biomass plans will require pellets made from 15.8 million tonnes of wood every year.