The car may look like a space pod that could fly but it’s actually hoping to do something debatably far more impressive: win a marathon desert race powered by solar […] 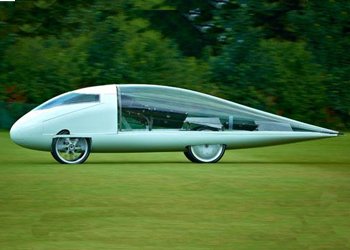 The car may look like a space pod that could fly but it’s actually hoping to do something debatably far more impressive: win a marathon desert race powered by solar energy.

The group of Cambridge students who designed and built the teardrop-shaped green car hope it will win the World Solar Challenge in Australia.

The competition pits entrants from across the globe against each other on a 3,000km drive from Darwin to Adelaide, in which the vehicles must be powered purely by the sun.

The Cambridge car called Resolution has a set of moving solar panels which track the path of the sun across the sky. The team claims this gives it 20% more power than it otherwise would get.

Weighing in at 120kg and measuring less than 5m in length, 0.8m wide and roughly 1.1m in height, Resolution is able to hit top speeds of almost 140 kilometres per hour (nearly 87mph) but only needs about the same amount of power as a hairdryer.

The team tested the prototype vehicle earlier this month at the Millbrook racing ground near Bedford.

Keno Mario-Ghae, team manager for Cambridge University Eco-Racing at the University’s Department of Engineering believes the car is “different” because they avoided a “trade-off” between aerodynamic performance and solar performance.

He said: “A huge amount of careful planning has gone into this project. It has involved research not just in terms of engineering and aerodynamics but into the materials we use, the modelling behind the design and the optimisation of the solar cells that power the car.”