‘Treasury calling the shots in EDF nuclear talks, not DECC’

A Treasury minister is calling the shots in crucial negotiations between the Government and energy firm EDF over the ‘strike price’ for new nuclear, it was claimed today. At a […] 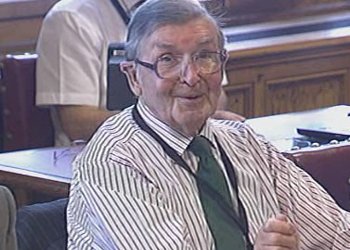 A Treasury minister is calling the shots in crucial negotiations between the Government and energy firm EDF over the ‘strike price’ for new nuclear, it was claimed today.

At a hearing of the House of Lords’ science and technology committee, Lord Jenkin claimed Lord Deighton is leading the talks rather than the Department for Energy and Climate Change (DECC).

While the committee quizzed DECC’s Chief Scientific Advisor, Professor David Mackay, the peer jumped on the chance to ask how talks were progressing.

Lord Jenkin (pictured) said: “Of course, we’re all hanging fire, waiting for the agreement between the Government and EDF on the strike price and contract terms for Hinkley Point. Are you aware that actually the Treasury is now leading this? Lord Deighton is actually conducting the negotiations directly with the company supported by your permanent secretary?”

Prof Mackay replied: “I’m afraid I have no knowledge of that.”

When Lord Jenkin commented that it is “actually a rather important development,” the government scientist went on: “My understanding is that the negotiations led by DECC officials are going extremely well and are very positive.”

But Lord Jenkin interjected: “And I’m bringing you up to date, it is in fact being run by the Treasury and the… Commercial Secretary to the Treasury.”

However the Department of Energy and Climate Change strongly denied it was becoming a junior partner in discussions.

A spokesperson told ELN it is “not the case” that Lord Deighton is running the talks, adding: “DECC has been working hand-in-hand with the Treasury since the start of the negotiations.”

The episode could add to the impression the talks are getting out of control at the department.

The committee was also due to question Energy Minister Michael Fallon during the same session but he cried off the appearance. DECC put this down to a “diary clash” and said it will rearrange a better time.