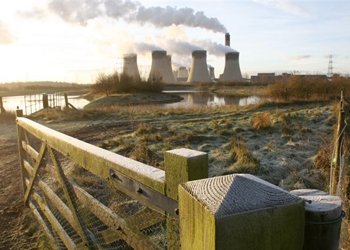 The converted coal to biomass plant will burn wood pellets instead of coal.

So far one of the generating units has been converted to biomass and two more will be using biomass by 2016, making it one of Europe’s biggest renewable electricity generators.

Drax calculates this will slash carbon emissions by 80% compared to using coal.

Wood for the plant comes from international suppliers and a small proportion comes from the UK.

The Energy Secretary also announced more funding for the White Rose CCS project at the same site. The two projects could support 3,200 jobs in Yorkshire and the Humber, according to DECC.

Mr Davey said: “Our coal industry has powered Britain for more than a century and today we’re seeing a clear roadmap for its future – whether by converting existing coal plants to cleaner fuels, or building state-of-the-art power stations that mean coal is truly clean.”

However she warned government plans to withdraw support for new biomass power-only plants are a “grave mistake”.