Hybrid and hydrogen powered buses have already been a familiar sight on London’s streets for several years but today for the first time they’re being joined all-electric models. Built by […] 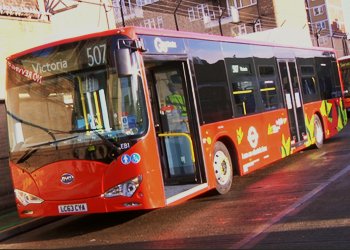 Hybrid and hydrogen powered buses have already been a familiar sight on London’s streets for several years but today for the first time they’re being joined all-electric models.

Built by the Chinese firm BYD, two new ‘ebuses’ are first joining the 507 route and later the 521 to undergo trials in the Capital.

The routes run from Waterloo Station to London Bridge and Aldwych and are popular with commuters.

It means they are well suited to the trials. John Trayner, Managing Director of bus company Go-Ahead said: “The two routes that run from this a garage are very [rush hour] orientated and we will actually have some down time during the day when we can fast charge [the buses], so they will last for whole operating day.”

The shortness of the routes also mean the depot is never too far away if something does go wrong.

Being all-electric the buses give off no emissions or pollution and the maker says each one stops around 86 tonnes of CO2 from entering the atmosphere for every year its in service.

They take four to five hours to recharge and can go for around 150 miles without being plugged back in. Quite how long a charge will last on the streets of London isn’t yet known.

The batteries are integrated into the body, meaning they can’t be easily replaced. Isbrand Ho, Managing Director of BYD Europe told ELN that shouldn’t matter: “Concessions are [typically] run for eight to ten years. The batteries will last 4,000 cycles, so given a cycle a day that’s more than 10 years worth of life out of the batteries.”

Reaction to the buses among travellers at Waterloo was mixed. When asked most commuters said they didn’t care what powered the buses as long as they weren’t late to work.