Is this wind “tower” an alternative to tall turbines?

Say the word wind power and the image of a tall thin turbine – like a metal flower – pops into mind. But a new design for a wind turbine […] 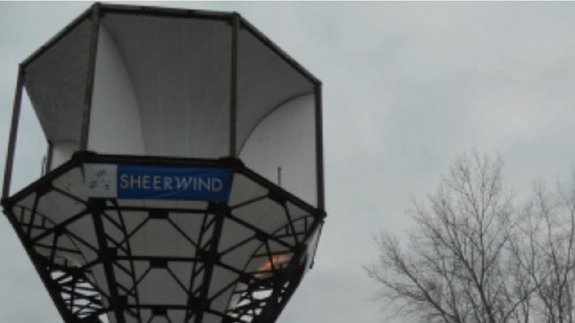 Say the word wind power and the image of a tall thin turbine – like a metal flower – pops into mind.

But a new design for a wind turbine has thrown the towering turbines out the window.

Instead of spinning blades in the sky, the design puts them at or below ground level.

Resembling an air traffic control tower, it takes wind at speeds as low as 2 mph and funnels it through a tube down to a generator at ground level.

Cyndi Lesher, Executive VP at the US start-up SheerWind which developed the technology said: “By concentrating and accelerating wind, we create a similar effect to the natural wind corridors used by traditional wind towers.”

SheerWind – which was founded by a scientist in 2010 – claims the wind energy system eliminates the risk to eagles and wildlife.

A furore was sparked in the States last year after figures suggested nearly 90 rare golden and bald eagles were killed by wind turbines over the last decade.

Ms Lesher said: “We can also install in low wind conditions and close to human populations—safely out of the range of eagle flight patterns and nesting sites.”

The firm said prototypes tested under controlled lab conditions generated as much as 600% more power than current wind turbines.

However some bloggers are unconvinced and have poured scorn on the claim.