Greenpeace activists yesterday scaled an oil rig in Norway that ExxonMobil plans to use to drill in the Russian Arctic. Five out of the 14 activists who took part in […] 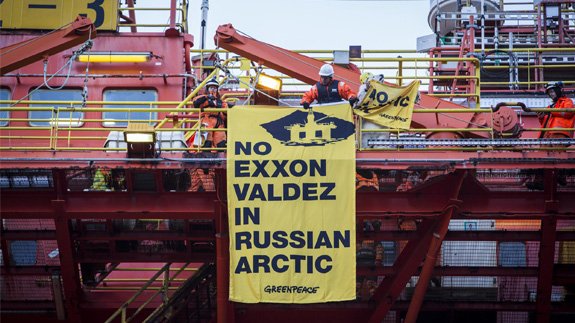 Greenpeace activists yesterday scaled an oil rig in Norway that ExxonMobil plans to use to drill in the Russian Arctic.

Five out of the 14 activists who took part in the demonstration entered the West Alpha oil rig (pictured, below), unfurling a banner that read “No Exxon Valdez in Russian Arctic” – to protest on the 25th anniversary of the Exxon Valdez oil spill in Alaska.

On March 24, 1989, the oil tanker Exxon Valdez ran aground in the waters of Prince William Sound, Alaska, spilling 11 million gallons of crude oil – believed to be one of the worst environmental disasters. The spillage is said to have affected 11,000 square miles of sea, killing thousands of marine mammals and sea birds and some claim the harmful environmental effects are still evident in the affected areas.

A spokesperson from Greenpeace told ELN police arrived at the scene after around an hour of the activists scaling the rig following which the protesters were asked to make their way down else face fines.

ExxonMobil plans to explore for oil in the Kara Sea alongside Russian firm Rosneft but environmentalists, including Greenpeace, are calling for a ban on offshore oil drilling in the Arctic and for renewed efforts to fight climate change.

The spokesperson added Greenpeace has asked ExxonMobil to provide a detailed description of what the energy firm intends to do in the Arctic and the safety measures it plans to take.

Erlend Tellnes, Arctic Campaigner Greenpeace Nordic said: “ExxonMobil plans to drill in the most extreme and remote area of the Arctic this year. This is madness. If something goes wrong, they will be all alone in the far north, with rescue equipment located thousands of kilometres away. We need to stop all oil companies before they cause the inevitable spill in the Arctic, where the harsh conditions would make it impossible to clean up.”

A spokesperson from ExxonMobil said the firm “appreciates that people are engaged in environmental and energy policies”.

But he added: “The task on hand is to be able to provide the world’s growing population and the growing economies of Asia and Africa with sufficient affordable energy without making irreparable damage to the environment. With the population estimated to reach nine billion by 2040 we strongly believe that it is necessary to develop Arctic resources to meet the growing energy need.

“ExxonMobil has 90 years of experience in Arctic and sub-Arctic oil and gas development and we have over the years conducted extensive research on arctic conditions and ice management. Contrary to the view expressed by Greenpeace we are therefore confident that we can safely develop Arctic resources.”