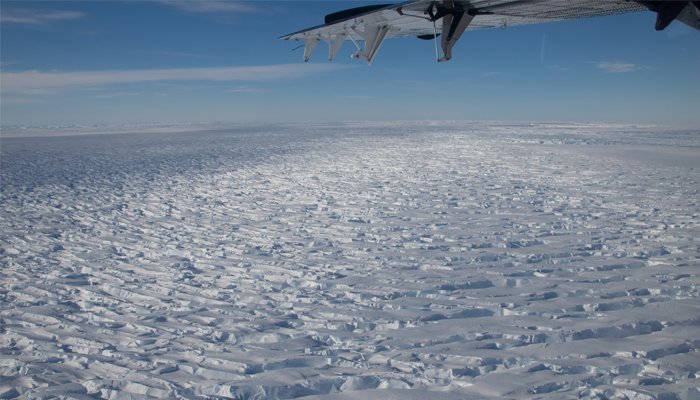 The surface of the Thwaites Glacier. Image: National Science Foundation

Researchers from the UK and US are leading a study that aims to explore the risks of the collapse of a giant glacier in Antarctica.

The $25 million (£18.2m) joint research programme is said to be one of the most detailed and extensive examinations of the Thwaites Glacier – its collapse could significantly affect global sea levels.

According to the UK’s Natural Environment Research Council (NERC), which is collaborating with the National Science Foundation (NSF), the glacier already drains an area roughly the size of Britain, accounting for around 4% of global sea level rise – an amount that has doubled since the mid-1990s.

The scientists aim to understand whether the glacier’s collapse could begin in the next few decades or centuries and investigate possible global disruptions due to climate change.

The International Thwaites Glacier Collaboration – the largest joint project undertaken by the UK and US in Antarctica for more than 70 years – involves around 100 scientists from research institutes in both countries, alongside researchers from South Korea, Germany, Sweden, New Zealand and Finland.

“Science, research and innovation is at the heart of our industrial strategy and this UK-US research programme will be the biggest field campaign of its type ever mounted by these countries. I’m delighted that our world-leading scientists will help leading this work.”