Air quality alerts will be displayed at 2,500 bus countdown signs and river pier signs across London 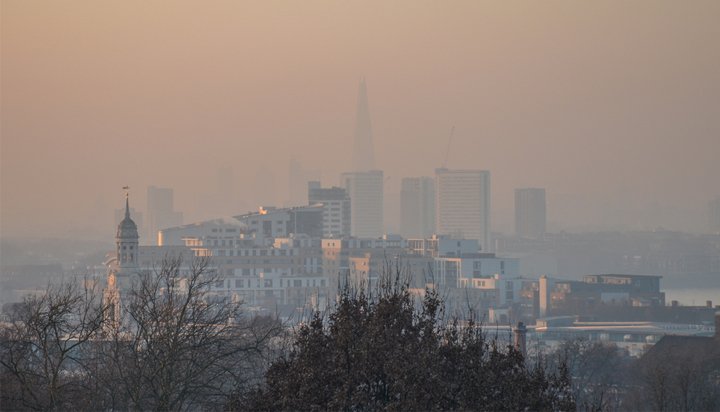 London Mayor Sadiq Khan has issued an alert for high pollution levels in London today as the capital struggles with poor air quality.

There was a marked increase in particulate levels on Sunday evening, which persisted into Monday, “due to a combination of poorly dispersed local emissions and sustained import of particulates from Germany and France”.

Today’s forecast is based on continued poor dispersion of local emissions and pollution imports from the near continent – the air imported today is expected to be more polluted “as it is bringing pollution from a working weekday rather than the weekend”.

Air quality alerts will be displayed at 2,500 bus countdown signs and river pier signs across London as well as 140 road-side dot matrix message signs on the busiest main roads into London, with instructions to switch engines off when stationary to reduce emissions.

In addition, electronic update signs will be displayed at the entrances of all 270 London Underground stations.

This is the 10th time the air quality alert system has been used since Mr Khan became Mayor, once for ‘very high’ and nine times for ‘high’.

A spokesperson for the Mayor of London said: “The high levels of pollution expected over the next few days is evidence of the scale of London’s air quality crisis and is exactly why the mayor is taking hard-hitting measures to clean it up.

“April’s launch of the world’s first Ultra Low Emission Zone (ULEZ) in central London is expected to reduce harmful emissions in the zone by around 45%. The mayor is also cleaning up the capital’s bus and taxi fleets, rolling out rapid charging infrastructure and delivering improvements to schools in some of London’s most polluted areas”.

Mr Khan also recently launched vehicle scrappage schemes for microbusinesses and charities that use polluting vans and minibuses and will launch a similar initiative to help lower income households to scrap polluting cars later this year and is urging the government to launch a national scheme.

The government’s Committee on the Medical Effects of Air Pollutants (COMEAP) advises adults and children with lung problems and adults with heart problems to reduce strenuous physical exertion, particularly outdoors and if they experience symptoms. People with asthma may find they need to use their reliever more often.

Older people are being advised to reduce physical exertion and anyone experiencing discomfort such as sore eyes, cough or sore throat should consider reducing activity, particularly outdoors.

The Department for Environment, Food & Rural Affairs (Defra) has also forecast “moderate, locally hgh air pollution” today, with the main area of risk covering much of England, Wales, eastern Northern Ireland and eastern Scotland. This is considered to be from a mixture of locally generated and continental sources coupled with light winds.

Moderate to high levels of air pollution are also forecast to persist on Wednesday, with a risk of localised very high levels developing in urban centres of northern England.