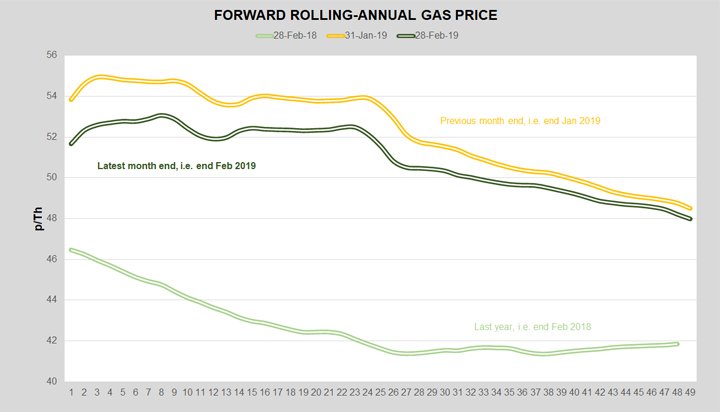 Prices dropped pretty much all along the curve during February 2019, with the forward curves for the rolling annual prices increasingly tending towards contango. Temperatures were generally above seasonal normal; some days were remarkably warm, with record high temperatures experienced widely over UK for this time of year.

Fundamentally, there is a good overall supply position and technical indicators are now confirming we have established a long-term downtrend for summer 19 prices and some other forward contracts too.

While March weather should reflect more seasonal normal conditions, and there is still some risk of a further cold period before proper spring arrives, we are very unlikely to experience the extremes seen last March; either in terms of weather or market impact .

Forward UK gas prices dropped a few percent during February 2019, while prompt prices were even weaker. Overall, backwardation reduced further, though the summer seasons were slightly in contango, indicating sentiment is clearly turning increasingly bearish. Having said that, winter prices are still in backwardation and the forward curve for rolling annual prices, while tending to contango, is still in limbo.

Forward prices are still higher than this time last year, when we were in the early stages of the ‘Beast from the East’; at that time, it appeared National Grid had managed the constraints well, which in fact gave false confidence to the market that UK could easily operate without Rough storage to fall back on at times of great stress. However, current supply fundamentals are good, particularly for LNG in to UK and Europe, where storage levels are already very comfortable for this time of year.

The most notable changes month on month have been the long-term technical analysis indicators, which for gas contracts confirmed the establishment of a long-term down trend. While in isolation this indicator is not definitive, combined with other fundamental and technical indicators it suggests the medium-term gas market is likely to be weaker.

Similarly to gas, prices generally dropped throughout the curve. Historically, February can be the coldest time of the year, often coinciding with disappointingly low production from renewable generation. However, during February 2019, apart from some days in the month when the market was highly dependent on gas-fuelled generation, availability of most generation production was good. Accordingly, nearby/short-term prices, focused on changes in weather forecasts, dropped more than prices for forward delivery periods, with longer-term prices remaining relatively stable.

So, the forward curve for rolling annual prices has further reduced its backwardation, indicating a possible change in market sentiment, though we are not yet seeing the same technical and structural weakness as gas – this needs to be watched over coming weeks to provide a sense of the longer-term trend and how bearish it may turn.

Brent crude oil continued to rise during February 2019, supported by OPEC’s compliant production management and sanctions on Venezuela and Iran. This increase in prices was despite US crude oil output hitting a record high by the end of the month. Views from market analysts are varied, with some looking for average Brent crude prices during 2019 to increase to $70/bbl, or even go higher, while others believe global demand reduction will dampen any significant increases. Nevertheless, oil is a still looked on as a political barometer for energy from a global perspective, so is worth monitoring over the coming months.

Current weather forecasts anticipate a more seasonally average month for March 2019 and a return of some more wintery conditions should not be dismissed yet. However, fundamentally, technically and structurally the market is in a very different position this year, compared to last, and it would seem some significantly bullish event might be required before the markets return to a long term up trend.

At Pulse, we are always keeping a close eye on the energy market and to see how we may be able to help you with our energy broker services, please click here